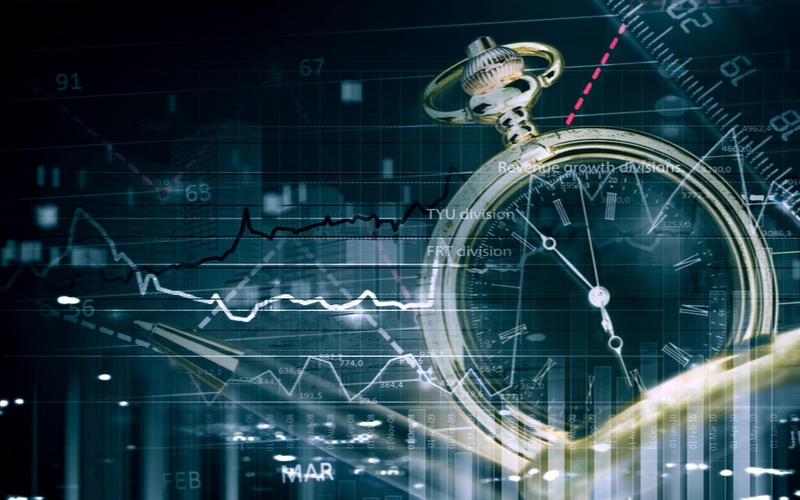 Most listings report days to expiration on a calendar basis. A one-week expiration is expressed as 7 days, even though only 5 trading days remain. The defense of using calendar days is because time decay continues to occur even on days when markets are closed. For example, between the Friday prior to expiration (with 7 days remaining) and Monday (one session later but 3 calendar days later), about one-third of remaining time value typically disappears. For those writing short-term short positions, this is a significant fact. By selling a position on Friday and opening to close on Monday or Tuesday, a profitable result is more likely than not. This assumes no significant movement in the underlying.

Although the opportunity is a great one, so is the risk. With three days transpiring between Friday and Monday, many changes are possible. The evolution of option pricing is not dependent solely on time decay. Volatility is also a factor.


However, volatility is not as severe a risk factor on weekends as many traders believe. It is true that changes can occur, and that a logical position could end up losing due to unexpected changes, often for reasons not fully understood. The “weekend effect” occurs due to lack of market activity. With markets closed, when large volume of selling takes place on Friday, lower implied volatility follows on Saturday and Sunday. The danger in this is relying on the weekend effect, because on Monday, volatility will be likely to return to normal. This could create a sort of “catching up” effect between the two trading days.


Three factors should be kept in mind when going short on Friday before expiration: timing of opening the short position on Friday, moneyness of the option, and liquidity of a position.


Timing: If the underlying is relatively dormant, as you would expect on the weekend, a short position will become profitable due to losing one-third of its remaining time value. However, this all depends on when positions are opened on Friday. Selling late in the day is not desirable, because by then most short traders have already opened short positions. Selling late may create an immediate gain but selling earlier in the session places the short trader at an advantage. This explains why it occurs that selling near Friday’s close results in little or no change by Monday’s open. The best outcome is more likely by selling to open early on Friday and buying to close late on Monday. In effect, this sets up close to two trading days over a four-day span.


Moneyness: Another consideration is moneyness of the option. A short-term short position at the money is likely to gain the most, compared to other strikes. The ultra-conservative idea of selling OTM options the week before expiration is based on the rationale that time value declines but gaining intrinsic value is also difficult. However, the decline in time value is the core issue in selecting the moneyness of the option.


Liquidity: Finally, when bid and ask are exceptionally wide apart, the option is illiquid. Even the reported levels of bid and ask do not always exist in the market and are not possible to get in a trade. Most traders have experienced the frustration of delayed or unexecuted trades due to this problem. It typically happens for deep ITM options, later-expiring positions, and options on much smaller than average stocks. The “zone” for trading should be limited to those on underlying issues with healthy option activity and open interest, to maximize how expiration and time decay work out.


The observation of how the weekend effect is expected to work may be distorted by the decision to count or not count weekends in longer-term volatility analysis. For example, the CBOE’s VIX is calculated using 365 days, but most options analysts prefer limiting their studies to the 252 trading days in a year. This is a difference of about 30% in terms of the number of days used to study volatility (and time decay). The result is that the VIX tends to exaggerate market volatility because it counts weekends when volatility levels are lower than on weekdays.


The difference between calendar days and market days should not be ignored because the assumed outcomes under each method can be vastly different. Markets are typically open for 6 ½ hours each trading day but closed for 17 ½ hours. Over the weekend, the hours closed add up to 65 ½ hours. This difference in time – 17 ½ versus 65 ½ — may explain why weekend time decay should never be overlooked as a timing factor for short trading close to expiration.


The use of weekends as part of time decay analysis is also distorted by the different timing between last trading day (Friday) and expiration day (Saturday). Should expiration Saturday be included in thew analysis, considering that trading ends the day before? Because of the difference in just which days are counted is substantial, volatility analysis and expected time decay are distorted.


Short positions might not perform as expected by traders trying to take advantage of the weekend effect. There are many reasons for the disappointment, mostly related to timing of entry and exit, moneyness, and liquidity, A simplified assumption might be that “all options lose one-third of their value between Friday and Monday before expiration,” but this is not true. Toi truly benefit from this fact of time decay selection is the key. The option should be opened and closed at maximum timing (early Friday and late Monday); it should be as close as possible to the money; and it should be a liquid position, meaning the spread between bid and ask should be as narrow as possible.