Home Options Trading Chobani IPO: Everything You Need To Know

The hip Greek yogurt maker Chobani is prepping for an IPO later this year, according to reports that they’ve filed confidentially with the SEC.

Reports say that the IPO could value the company at up to $10B.

Most of the time, the IPO of a company that sells 150-gram yogurt cups wouldn’t be the hot talk of Wall Street.

But, Chobani’s IPO represents a growing trend in the food and beverage industry: healthy and organic foods. In a market with few high-quality pure plays on this trend, Chobani represents more than yogurt.

You see it everywhere: Whole Foods, Trader Joe’s, Chipotle, etc. Consumers are willing to pay a premium for food that fits their personal diet, is healthier, organic, or sourced ethically.

While the big food producers responded with their own line of health-conscious, this demographic prefers smaller, non-Fortune 500 companies.

And Chobani has been eating the rest of the yogurt industry’s lunch for several years running, showing no signs of stopping. They currently hold a 52% market share in Greek yogurt, which is their main product.

Chobani is stepping into very fertile ground for their IPO, with recent huge successes like FIGS (FIGS), Roblox (RBLX), Doximity (DOCS), and even the unlikely bounce-back from Robinhood (HOOD) after a very rocky first few trading days.

Even given the recent strife in the SPAC market, which was formerly responsible for the vast majority of IPOs coming to market in 2020 and early 2021, the IPO market is still holding up quite strong, as you can see from the chart courtesy of Renaissance Capital below IPOs. 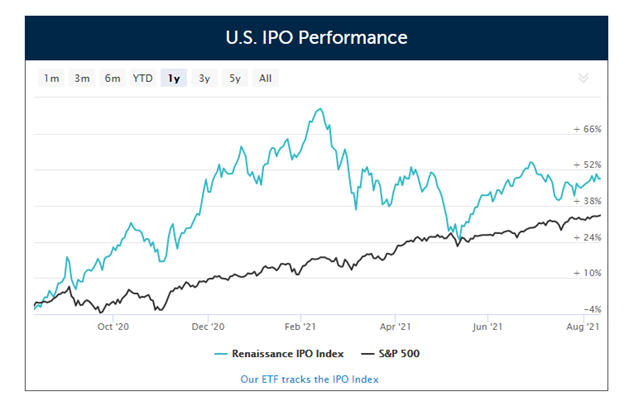 Investors willingness to invest in new and speculative IPOs is one of the best barometers of market sentiment.

Should the market for IPOs remain hot, Chobani is stepping into very favorable conditions, making the bankers leading the IPO the primary factor to watch in these upcoming months.

As we know from the Robinhood IPO, a badly priced IPO can make the market completely sour on your stock (that is until it gets the Reddit “hug of death”)

Chobani isn’t another among the army of Silicon Valley companies with lofty dreams of disrupting multi-billion dollar categories.

Founder Hamdi Ulukaya didn’t have a killer app idea, a deep network, or even significant business experience when he founded the company in a small upstate New York town.

In fact, the company came into existence as a result of pure randomness. You see, before Chobani, Ulukaya was a struggling feta cheese merchant. His father told him that America doesn’t have good cheese, so he should start a cheese company.

The cheese company, Euphrates didn’t pan out and Ululkaya says the financial and personal troubles associated with running Euphrates were some of the most challenging years of his life.

By pure luck, he got an ad in the mail from a business broker trying to sell Kraft’s old yogurt factory. Kraft was reducing their footprint in the yogurt market and there were few buyers in sight for an old smelly yogurt factory.

But Ulukaya knew dairy production like few others. After all, most entrepreneurs don’t set out to make yogurt. While everyone was figuring out how to make money on the internet, Ulukaya struck probiotic gold in the deal of a lifetime.

They don’t bother with the four-bedroom single family house. Every contractor in town has worked on identical houses several times, and can probably walk through the halls blindfolded.

But that old standalone building is worth 10x today’s prices when rezoned and sold to the right company.

Ulukaya was no different: he had a margin of safety built into Chobani’s founding. If the yogurt business failed, he could always sell off the assets and still make a profit.

Skin In The Game

Jim Rohn once said that you’re the average of the five people you spend the most time with. If we extend that to companies, they are simply averages of their employees’ decisions.

No amount of financial engineering, software streamlining, or cost-cutting will save a company full of employees who constantly make bad decisions and have no stake in its future.

This heuristic is even more pronounced in a manufacturing-based company like Chobani.

A few savant coders can’t save the day and pick up everyone else’s slack. If there’s one employee not doing their job, your entire inventory could be toast.

In 2016, Chobani gave 10% of the company’s stock away to their employees. When the New York Times asked Ulukaya why, he responded that he couldn’t have built Chobani without them, and that “Now they’ll be working to build the company even more and building their future at the same time.”

With each sealed yogurt cup, Chobani employees probably see a much larger purpose. They have real skin in the game. If they do their job well, their stock will be worth more, potentially millions.

This phenomenon is arguably the reason why we see so many young tech startups eating the lunch of legacy tech companies every year.

Furthermore, at the corporate level, Chobani has done their best to avoid selling any shares, instead funding the company through a $750 million line of credit.

A Primer on Greek Yogurt: A Growing Food Category

Chobani’s main product is Greek yogurt, which is a thicker, higher protein, and lower fat version of traditional yogurt.

In the last few years, consumers have started substituting Greek yogurt for all manner of higher-calorie creamy products like mayonnaise or sour cream. I’ve had some amazing Greek yogurt based salad dressings and creamy hot sauces.

Yogurt in general has been steadily growing over the past two decades, as noted in the chart below: 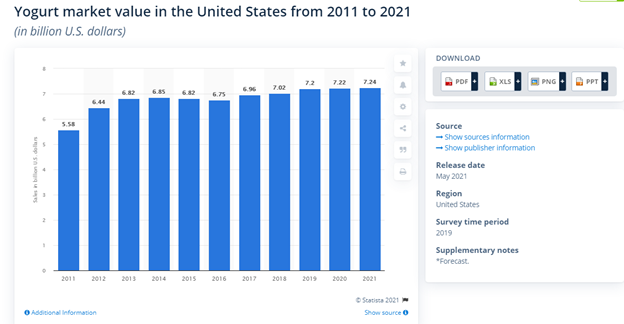 But the really impressive factor at play here is that Greek yogurt is rapidly cannibalizing traditional yogurt sales.

According to the leaked 2014 Chobani investor deck, it takes just one cup of milk to make three cups of Greek yogurt, while the same cup of milk makes only one cup of traditional yogurt.

And while it’s hard to find up-to-date data on Greek yogurt’s cannibalization of the yogurt category, this chart from 2014 provides some color on the rate of the product’s acceleration.

This piece is unusually positive, but don’t mistake the interest in a growing trend for naive investing.

It all comes down to price, and if Chobani and their bankers get the valuation wrong off the bat, Chobani’s stock could be set up for a painful few months post-IPO.

Ultimately, we’re traders, so we’re most interested in Chobani because it has all of the makings of a retail darling: it’s hot with Millenials who are the most active traders, it has the “buy what you know” factor, and it’s a play on a popular investing theme: shifting consumer eating habits.

The post Chobani IPO: Everything You Need To Know appeared first on Warrior Trading.