Every trader knows what it’s like to trade with a small amount of capital.

Whether to them that’s $100 or $10,000, most traders find themselves thinking that if they just had X amount of capital, many of their trading troubles would go away.

To an extent, trading a large account does grind away some of the complications associated with small account trading, but if you’ve never traded before, it doesn’t matter if you start with $100 or $10 million, you’re unlikely to succeed.

Most small account traders have a source of consistent income from which they can tap a portion of to fund their trading account.

As a result, some treat their trading accounts as “moonshots,” where they take significant risk in the hopes of hitting it big, and reloading their trading capital should they fail.

Of course, this doesn’t define all small account traders, but a large portion of them.

Right or wrong, this is the psychology of the majority of small account traders.

Instead, the small account trader might be better suited to a more measured, long-term approach of trading within more reasonable and defined risk limits, and gradually adding a small portion of their income to the trading account.

Ideally, the trading account is growing both from capital appreciation and regular deposits. While there won’t be huge upward spikes in the equity curve, you are consistently growing, with the regular deposits providing a padding for losing streaks.

At the portfolio level, risk should be viewed as a percentage of your trading account, rather than a static number that feels comfortable for you. This way, your risk levels scale along with the growth or decline of the account.

One of the primary ways that small account and large account traders differ is in how much of their trading capital they put at risk per trade.

In a completely logical world where everyone is a robot, this doesn’t make sense. If there’s an optimal risk level, then it shouldn’t matter how large your trading capital is.

However, small account traders are human and many feel that if they take the slow, low-risk route, they’ll be piking along for years making measly returns. As a result, they tend to take larger risks.

The most aggressive risk level per trade I’ve seen professionals like Alexander Elder and Adam Grimes recommend in their writing is around 5% per trade.

However, this number is high enough that a few bad trades could leave you in a pretty large drawdown which is tough to come back from psychologically.

In general, the consensus from quality trading literature for aggressively trading a small account is between 2% and 5% of the account at risk per trade.

Large traders, on the other hand, largely risk less than 1% of their capital per trade.

Take pairs trading, for example, where you simultaneously buy and sell two similar assets when the spread between the two assets deviates from recent history.

You not only have to allocate capital to both the long and short sides of each trade, but the overall return is lower, because typically, you might make $100 on your long stock and lost $80 on your short stock, resulting in a net profit of $20, whereas if you just bought the stock you would have made $100.

Another example is any type of arbitrage, where you take advantage of momentary price discrepancies between near-identical assets. For example, if you were trading the Class A shares of Fox Corporation (FOXA) against the Class B shares (FOX). 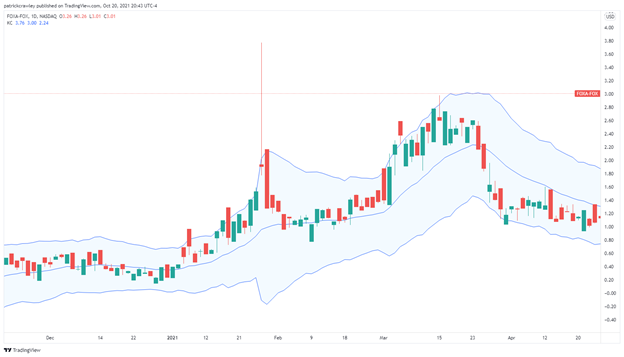 As you can see, the Class A shares (FOXA) typically trade at a premium to the Class B shares, even though ownership of both share classes is almost economically identical.

Even in the best scenario, you made $0.60 per “unit” of the pair (meaning one long share and one short share).

So while backtesting these strategies always looks nice and you can mess with the numbers in your head to try and make them work, the reality is that highly capital intensive, low-return strategies are best executed with a large account balance behind you.

One of the key things about these arbitrage-style strategies like share class arbitrage is that the return profile is skewed against you. You’ll have a lot of small winning trades, but the size of a winning trade is capped by the strategy. But you can have some major losing trades when markets get into disarray.

Smaller account traders are much better suited to asymmetric risk-reward profiles. A perfect example is entering hot momentum stocks at “low-risk” points, like in a pullback within an uptrend, or near a support level.

This way, you have your risk capped, but you allow yourself to hit potential home runs if you manage the trade correctly.

The Pattern Day Trader Rule (PDT) prevents traders with less than $25,000 in their trading account from making more than three day trades within a rolling 5-day period.

For most aspiring day traders, this serves as the largest hurdle.

As in anything, the most effective way to get better at day trading is to day trade. While you need quality education and knowledge to navigate the markets, they’re useless if you don’t actually apply the info with enough frequency to build a skill.

The PDT rule makes it so that the newest traders (aka, the traders that need the experience most) can only practice their skill three times a week, while many full-time traders make more than three trades in a single day.

The PDT is a FINRA regulation, meaning that there’s no getting around it if you operate in the United States. So the only way to get around it is to use legal means, like opening multiple brokerage accounts or altering your trading style to more of a hybrid between day trading and swing trading.

But it’s a gut punch when you’re mentally set on day trading and someone tells you to swing trade to get around the PDT. This is why I’m an advocate of the hybrid approach, which is still imperfect if you’re dead-set on trading the 5-minute chart, but at least you’re not staring at daily candlesticks all day.

The hybrid approach involves using a higher timeframe than most day traders. Say, the 30-minute chart, for example.

Then you manage the trade as you would in any other circumstances, sometimes holding overnight when necessary. This way, you reduce the frequency at which you actually make day trades, and instead hold them overnight sometimes.

But you have to ask yourself, if you had a $10 million account, would you suddenly become a highly profitable trader?

Most of the best traders in recent history dealt with insane commissions making up large percentages of their account, delayed quotes, floor traders screwing them over, etc., so it’s healthy to put modern small account woes into context.