The non-directional trader wants to hedge delta to make it delta-neutral and have theta as large as possible. In theory, they want the delta theta ratio to be zero. In practice, this is not achievable because delta changes continuously as the price of the underlying moves. And you don’t want to be constantly over-adjusting your positions.

So what is the ideal delta theta ratio in practice?

Tom Sosnoff of TastyTrade was asked a similar question at a symposium when he answered:

“A lot of this depends on where the markets are based on current levels of implied volatility.”

At the time that he gave his answer, the market volatility was low, which means lower theta, and higher delta-theta ratios. He continues:

Basically, for a non-directional trader capitalizing on theta decay, you want to try to target a 0.5 delta-to-theta ratio. Keep delta at 50% or less of your theta, and you should be good.

This ratio may not always be possible when the price moves all around in the middle of a trade. It also depends on the underlying. It is more achievable in the indices such as RUT (Russell 2000) and SPX (S&P 500).

That’s one of the reasons why many non-directional traders like working with the indices. Another reason is that it avoids large moves of individual stocks that may be experiencing a catalyst event.

Let’s look at the starting delta-theta ratios of some option strategies.

Here is a bull put spread on RUT with 29 days to expiration: 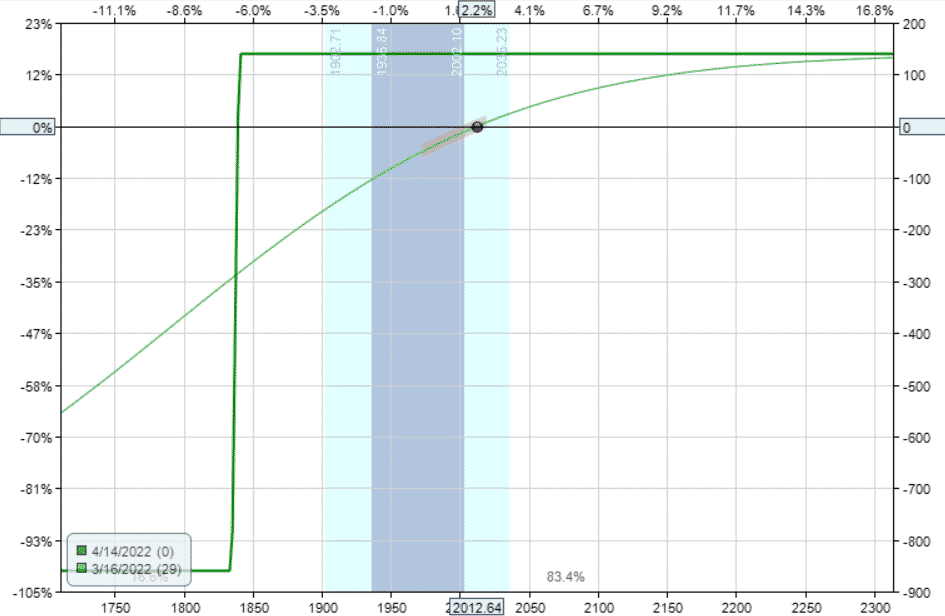 Note that we are selling two contracts. If we were selling one contract, all the Greeks would be halved, but the ratio remains at 40%.

The short strike in this example was at 18-delta.

If Closer To The Money

The trade becomes more directional. As we go closer to the money, the Delta (and Vega) becomes more dominant in relation to Theta.

If At Lower Volatility

VIX at the time on March 16 was moderately high at 29. A more appropriate volatility metric is the RVX (CBOE Ruessel 2000 Volatility Index), which at the time is at 33.

If we had put on a similar trade in a low volatility environment such as Janurary 4th, 2022.

The Greeks would be different:

Keeping with the March 16 bull put spread with the short strike at 18-delta, we now add a bear call spread to make an iron condor: 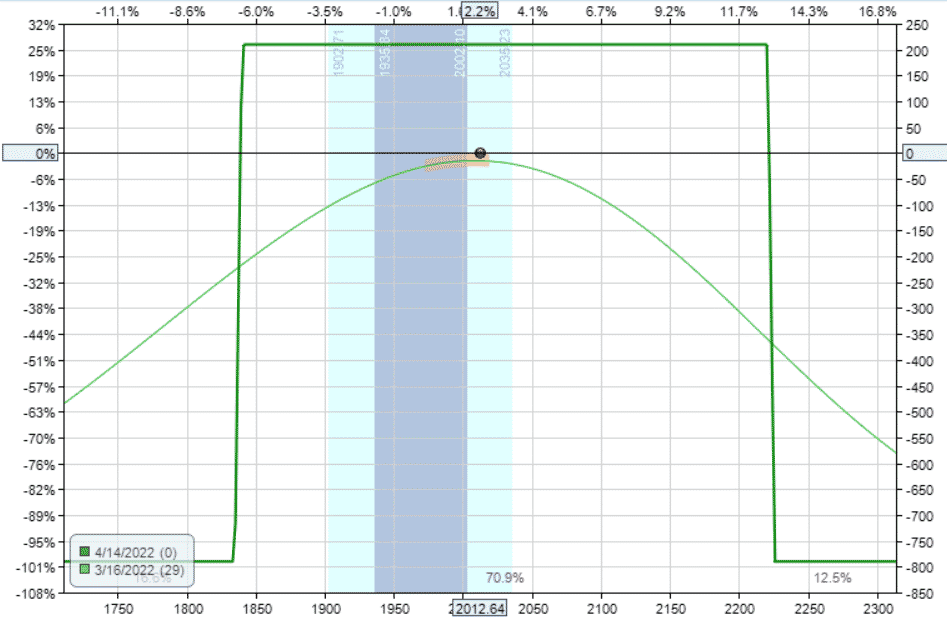 We kept the width of the bear call spread to be the same as the bull put spread, but we positioned it further away from the money such that the resulting delta is near zero.

Because we have eliminated delta, the delta theta ratio here is 0.01 — just about perfect.

If we had positioned the bear call spread equidistance away with short-strike at 2185, its delta would be -0.47 and theta would be 7.6, resulting in a higher delta-theta ratio of 0.06 — still very good, but not as perfect.

If we move the two short strikes of the iron condor to at-the-money and widen the wings, we get an iron butterfly. 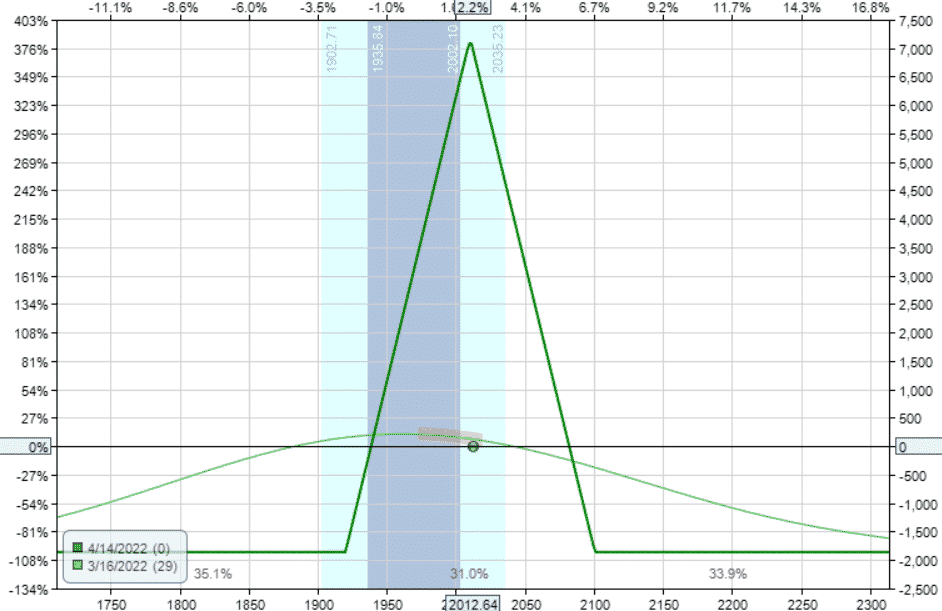 Even after dropping down to one contract butterfly, this trade is twice as large as the iron condor. See that the max risk on this trade is $1860, whereas the condor is $790.

Even taking this into account, butterflies typically have larger theta and vega than condors because they are selling at-the-money strikes.

We are just using the magnitudes of delta and theta. In calculating the ratio, we are not concerned with the negative in the delta.

However, as a trader, we do need to note that this trade starts out with a negative delta which is slightly bearish. Even though this butterfly is symmetrically centered, the bearish tilt is due to the put-call skew.

Some traders may prefer this negative delta as a hedge against the negative vega in a market downturn.

But other traders may prefer to start out with a more neutral delta by adjusting the strikes widths into a broken wing butterfly as follow. 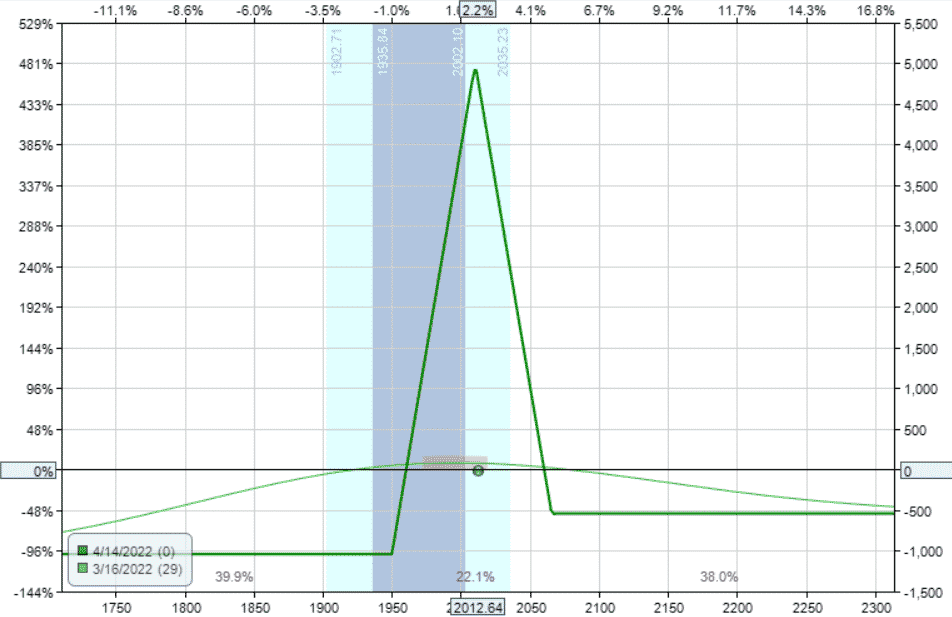 The delta is closer to zero, and the delta-theta ratio has been reduced to 0.04.

Alternatively, some traders prefer to have the downside expiration breakeven further away from the current price. The Rhino strategy, for example, starts out with this configuration.

This can be achieved by setting the upper long leg to be near where current price is. 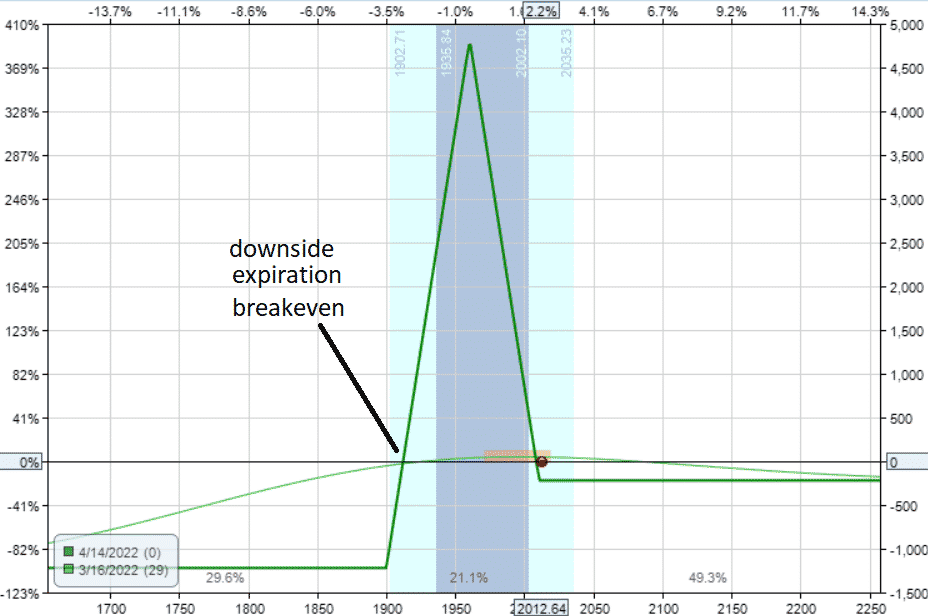 This time, we used an all-puts broken wing instead.

The Greeks and the ratios end up being quite similar:

If Closer To Expiration

Now suppose we have a similar broken-wing butterfly starting at 14 days to expiration instead of 29 days:

Theta has increased for sure. In fact, it has grown bigger than vega. (This means shorter-term trades have less risk due to changes in volatility than longer-term trades.)

Another Greek that has grown is Gamma.

Gamma is the rate of change of Delta. A larger Gamma means that Delta will fluctuate more, causing more rapid changes in the Delta/Theta ratio.

If you were to follow my advice in Bootcamp Day 1.

If you’ve enjoyed all this talk about Greek ratios, visit the topic of Theta-Vega ratios.

Which S&P 500 Stocks Are The Most Liquid?