Home Options Trading How the US Weaponized the Dollar Against Russia

The US and NATO’s response to the Russia/Ukraine war has upended the post-WWII global order we’ve all gotten used to. And nobody really knows if that’s permanent or temporary.

Many strategists and analysts are talking about how this reaction is accelerating deglobalization, where countries get more isolated and trade less in favor of onshoring production of essential goods.

Much of the root of this response is the US attempting to cut Russia off from US dollars. Before we talk about that, let’s understand the importance of dollars.

US Dollar Hegemony and Its Importance to the Global Economy

The US dollar is the global reserve currency. That means countries prefer to both store wealth in dollars and settle trade in dollars. Nations don’t want to receive exotic currencies that are prone to massive fluctuations in value in trade, therefore, the world settled on the dollar as the standard.

The US being the arbiter of this reserve currency gives it vast control and influence over the world and global economy. It can “weaponize” the dollar to bring about outcomes that serve its interest, as it has done many times.

Access to dollars means the ability to trade easily, because other nations want to trade in dollars. Losing access to dollars not only means you have a harder time trading, but other nations will avoid trading with you even if you find a workaround because they don’t want to risk upsetting the US and suffering from US retaliation.

Hence, in many ways, the US could win a war without ever firing a bullet. It’s the power of currency.

Furthermore, with this reserve status, the US has the power to not only expand the money supply by printing money, but more importantly, as many are pointing out, the ability to “print” commodities that they’re short of.

There’s been much talk in global macro circles about the US’ ability “print” oil by printing dollars and buying oil with it, and how the US moves throughout this crisis might have jeopardized this ability.

To be clear, there have been many calling for the end of US dollar hegemony for decades, and all have been wrong. If we just go by past history, this event will likely pass as a hiccup in the rearview mirror. However, there are some smart people betting against history, and that’s an interesting and worthy point of view to unpack.

How The US Cut of Russia From the Dollar

The US and its NATO allies cut Russia out of the SWIFT system, which is essentially the bank messaging system that allows the easy transfer of funds between different banks. Tons of essential US and Europe-based firms halted operations in Russia. The US levied heavy sanctions on Russia in the form of halting imports and exports, namely exports of goods vital to Russian national security like semiconductors and planes from Boeing and Airbus.

The US’ entire goal was to choke out Russia and largely cut them off from the rest of the world. Create financial stress domestically, which inevitably leads to civil unrest and regime change. Hence, the US’ ability to win a war without firing a shot.

Why the US Cut Off Russia

From the US perspective, if Russia is nation-building and invading their neighbors, that is an inherent threat to the US. With Russia arguably being the third world superpower behind the US and China, a stronger Russia threatens US interests.

However, it’s not that simple. Russia is aggressive and set out the invasion of Ukraine with a hostile frame towards anyone trying to get in their way. It started with veiled threats and evolved quickly into outright nuclear threats. Whether or not Russia is a paper tiger in this situation is up for debate, but the world probably didn’t want to test that and risk a nuclear disaster by getting physically involved in the conflict.

So the US turned to financial warfare, seemingly the only non-violent option, which we detailed above.

It’s a gambit, though, just as Russia’s decision to invade Ukraine was. There’s no possibility to predict with certainty the outcome. It’s clear that the US has made some sacrifices in their choice, like increased inflation, shortages, and high geopolitical tensions.

But on the positive side for the US, it looks like the US and its allies in NATO and abroad are more united than they’ve been in a long time.

The Global and Russian Response to the US

Europe is largely dependent on Russia for their natural gas, which serves as a backbone of their energy stack, as most Europeans rely on Russian natural gas to heat their homes. By and large, Europeans are net-importers of gas.

Furthermore, since the US seized Russia’s central bank reserves, a number of eyebrow-raising events outside of Russia started occurring that many are attributing to this seizure causing anxiety in other nations.

For example, Saudi Arabia is in talks to price oil sales to China in yuan.

Furthermore, Russia made the substantial move to force “unfriendly” (their words) countries to pay for natural gas in gold or the Russian ruble. So far, Europe is yet to pay for their gas in gold or rubles, and gas is still flowing to Europe, despite many threats from Russia to cut off supply.

However, the gambit worked in Russia’s favor, as these threats both greatly stabilized the ruble and increased the price of gold, which Russia has been buying in droves since they’re largely cut off from hoarding dollars. 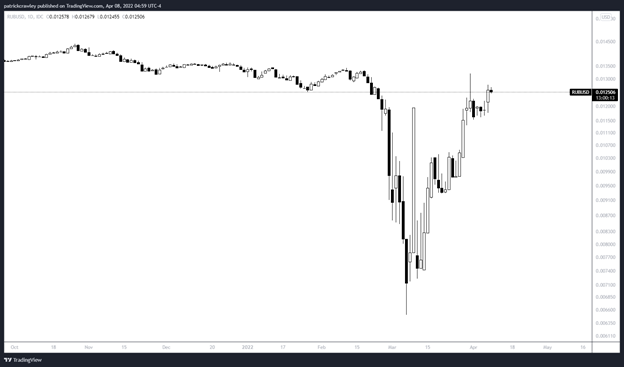 Russia has been making similar threats, some veiled and some blatant, with regard to their supply of several different commodities, which is causing massive uncertainty and generally bidding up commodities, as traders are unsure if there will be a supply crisis.

As the dust settles on the “opening” of the gambit between the US and Russia, both nations are weighing their options.

Russia and Ukraine seem to be getting further in their peace talks, albeit slowly, and the US is debating on whether or not to levy more or lift the sanctions entirely and pursue an alternative route of attack entirely.

The post How the US Weaponized the Dollar Against Russia appeared first on Warrior Trading.

A simple Trading Strategy with a winning rate of 88.89%

Why I Moved To Mexico City (8 REASONS)