Home Options Trading How To Use Measured Moves for Profit Targets

What is a Measured Move?

A measured move is a swing trading concept that assumes the next leg of a chart pattern or trend will be roughly equal to the previous leg.

You use measured moves to set your profit targets and project the magnitude of the next price swing.

Assuming that the future will resemble the past is a heavy assumption that can really hurt us when we’re wrong. The reason we make such an assumption is because the volatility of most stocks tends not to change dramatically without reason.

Stable stocks like Apple don’t make 10% moves except for the most extreme circumstances, and history confirms that.

It’s important to understand that the measured move isn’t an indicator, oscillator, or specific chart pattern, but rather a swing trading concept where you use the size of the previous swing to set your profit target and/or stop loss (don’t worry, we’re about to explain this visually).

You don’t need any special tools or charting platform to do this, all you need to do is draw some lines on your chart. Before computers were ubiquitous, the old school chartists would use rulers on printed charts to determine their measured moves.

This is a concept that is best taught visually, so see the labeled chart below: 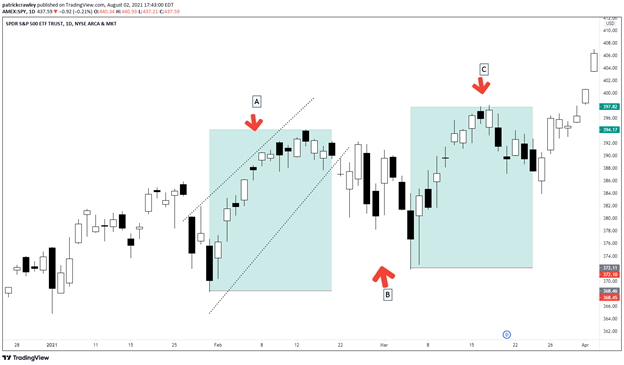 I know this chart’s labeling is a bit all over the place, so allow me to explain it:

Notice how on Exhibits A and C, I drew green boxes? That green box is the measured move. All I did was measure Exhibit A from low to high and copy/paste that same box at the low of the pullback. So if you bought somewhere around Exhibit B and were using a measured move, your profit target would be at the top of the green box in Exhibit C.

In this case, the measured move worked out perfectly, your profit target was roughly at the high of the second swing. This is an idealized example for demonstration purposes, however. Let me show you another, less perfect, example.

Below is a chart of Parker Hannifin (PH) from 2019 which uses a measured move to project the size of the next price move. Just as in the initial example, we measured the initial swing (exhibit A) from high to low and used the size of the move to set our profit target when we buy in the area around exhibit B. 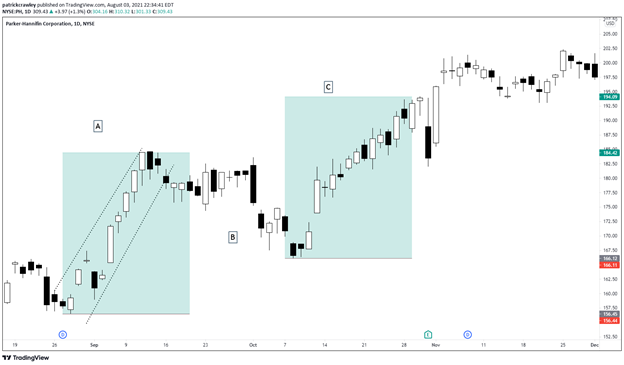 You might notice a problem here, though. We project the measured move starting at the low of the pullback, which we can’t possibly know in live trading. For this reason, using a measured move in real-time will be less perfect and imprecise. But remember, it’s just a tool for rough estimation rather than a quantitative tool that needs to be followed to the tee.

In trading, setting realistic expectations for trade outcomes is paramount to consistent success. Most stocks don’t make 100% moves inside of a week, and if you manage each trade as such you’re going to fail.

Linda Raschke says that you have to “take the cookies when they pass the jar around,” in other words, you’re in no control of what the market gives you. The only thing that you control is if you take what the market will give you. And determining whether or not to take the cookies and run, or wait around for the jar to come around again is one of those pressing questions that still troubles even the legends like Paul Tudor Jones or Ray Dalio.

The measured move is one such tool to estimate the market’s next most likely course. The concept is simple: a stock’s level of volatility is that way for a reason. You don’t need to know the reason, but the daily volatility of a stock tends to stay relatively stable unless there’s a reason for it to change. A stock with a daily range of 2% doesn’t move 10% in one day without some significant news or market event occurring.

And for that reason, you can make the assumption that the next move in a stock will be very similar in size to the previous move. Of course, the market is made up of humans with different motives and incentives driving their decisions so there’s no exact science here, but its a strong concept that can give you a concrete target for exiting your trades.

Measured moves and ATR multiples are two popular volatility-driven methods for determining trade sizing, entries, and exits. They both carry the powerful characteristic of allowing market history to drive your trading decisions, rather than guesswork driven by potentially meaningless technical levels.

But you can make the argument that measured moves provide much more context to your trade, and simply analyzing your trade idea through the lens of setting targets based on market swings could persuade you to ditch bad ideas altogether. This can be especially powerful when you’re a newer trader without a realistic sense of what to expect from your trade setups.

It’s common for traders to be vigilant about setting stop losses–after all, every trading book stresses this endlessly, but forget about setting profit targets. And while styles differ and some traders would rather allow the market to play out and exit trades as the price unfolds, its a good idea to have a base case as to what you expect from the trade, and what your general goal P&L looks like.

Otherwise, you don’t know what your reward/risk ratio is, and its easy to get sucked into entering trades where the chart “looks good” and setting a stop loss a few ATRs away from your entry, without truly analyzing the market structure.

In my own experience, this mistake arose most when entering a trade mid-swing. See the crudely drawn picture below. There’s a little circle at the previous swing’s high. Looking at a chart at that time, things probably look bullish, but consider the market structure first. 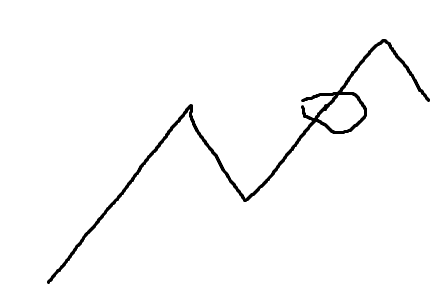 You’ve already missed half of the move, and you’re entering at the previous high. This is more of a breakout trade than a classical swing trade, whether you realize it or not. And the highest probability breakout trades occur after a tight range forms near the highs, not in a pullback/retracement area.

So if you go into a trade like this expecting the swing to extend, your stop loss is probably below the recent low, and if things go normally, your reward/risk is 1, meaning that you need to make money by picking the correct direction more than 50% of the time, which is very difficult.

I’ve justified the use of measured moves in this article based on the notion that most of the time, volatility in a stock doesn’t change dramatically week to week. But sometimes volatility does change and the measured move becomes a flawed measure by which to project future price moves.

But all is not lost, because you can normalize the recent measured move using ATRs. For example, let’s take a look at the monster move in steel stock Nucor (NUE) after the 2016 election. This move was what some would call “event volatility,” which is volatility purely driven by a binary event, meaning you can expect it to subside soon. 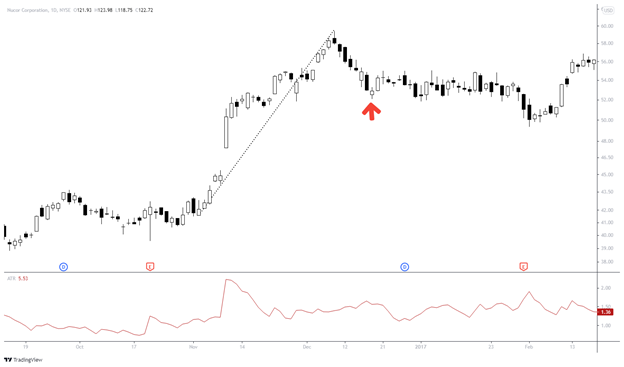 So in this situation, if we use $2.00 as the ATR level for the first swing, that’s a 7-ATR swing, or roughly $14 points. If we wanted to join the trend around the red arrow, we might instead look for roughly $9 points.

Of course, this is still pretty flawed, and it’s generally much harder to understand where a market is headed after a huge volatile event.

The primary point we’re driving home here is that using measured moves is an excellent way to have realistic expectations for trade outcomes. Even if you don’t use actual live profit target orders, you need to know when to take what the market has given you and be happy with it.

The reality is that stocks don’t go up in a straight line and many large moves are reversed. If you don’t take some profits when the market gives them to you, you’ll see many green trades turn into red trades.

The post How To Use Measured Moves for Profit Targets appeared first on Warrior Trading.