Today, we will calculate the theoretical iron condor success rate based on the delta of short strikes and the width of the spreads.

In the end, you will understand what drives the probability of success for iron condors.

Then, we will look at achieving a greater success rate than this theoretical number by implementing some take-profit rules and adjustment techniques.

The Success Rate Of Strangles

Why are we looking at strangles when we are talking about iron condors?

Don’t worry; we’ll get there.

Suppose we were to sell a strangle on SPX with the short strikes at 15-delta.

ThinkOrSwim calculates the probability of profit to be 68%. 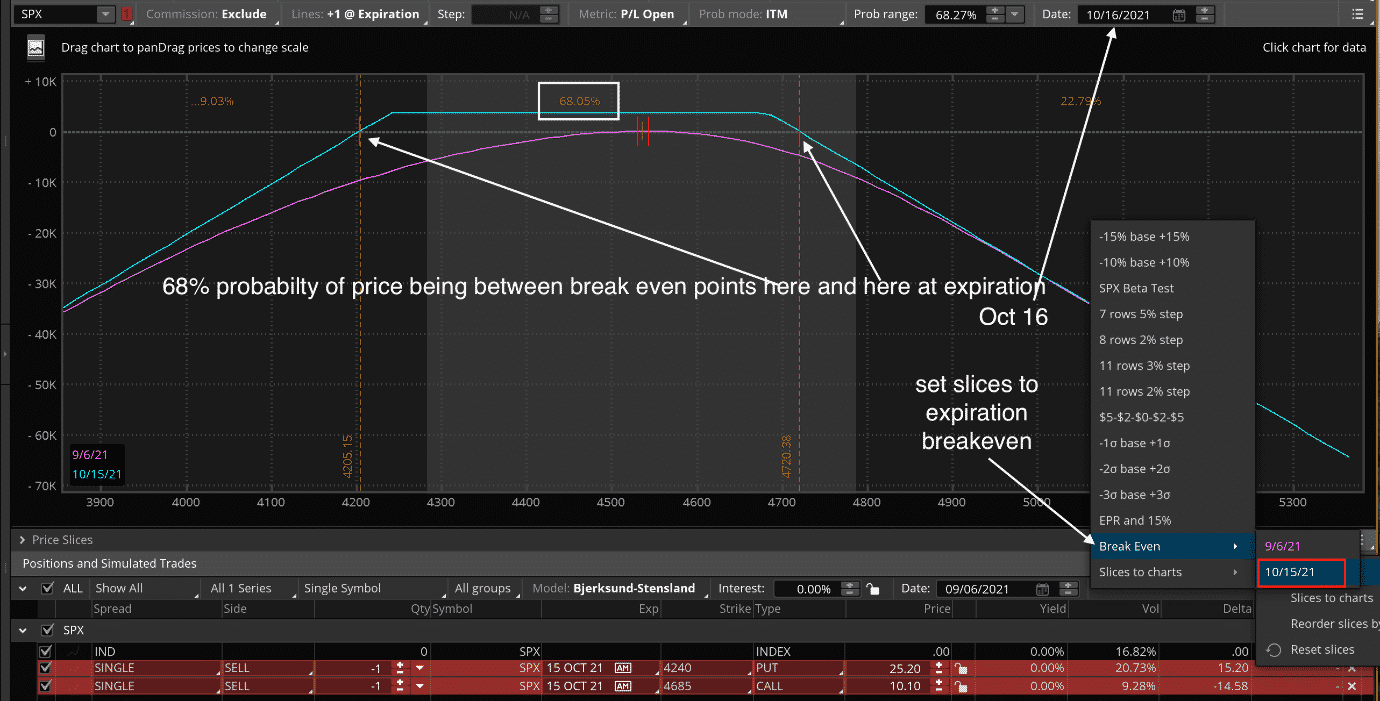 The blue line is the profit-and-loss (P&L) graph at expiration. Ignore the purple T+0 line.

That means there is a 68% chance that this trade will make at least one penny when held to expiration.

Although the software arrives at this number using a more sophisticated formula, we can get a rough estimate by interpreting the “15 delta” of an option to mean there is a 15% chance that the option will be “in-the-money” at expiration.

These two are mutually exclusive events. If one happens, the other can not occur.

Statistics of mutually exclusive events tell us that the probability of the price going either above the call or below the put is 30% — the sum of the two events.

So the probability of price staying inside the two strikes is 70%, close to the calculated theoretical value.

The breakeven points for this strangle, which are at $4720 and $4204, are calculated by

Now see that the success rate of this iron condor is 64% — less than the strangle by 4%. 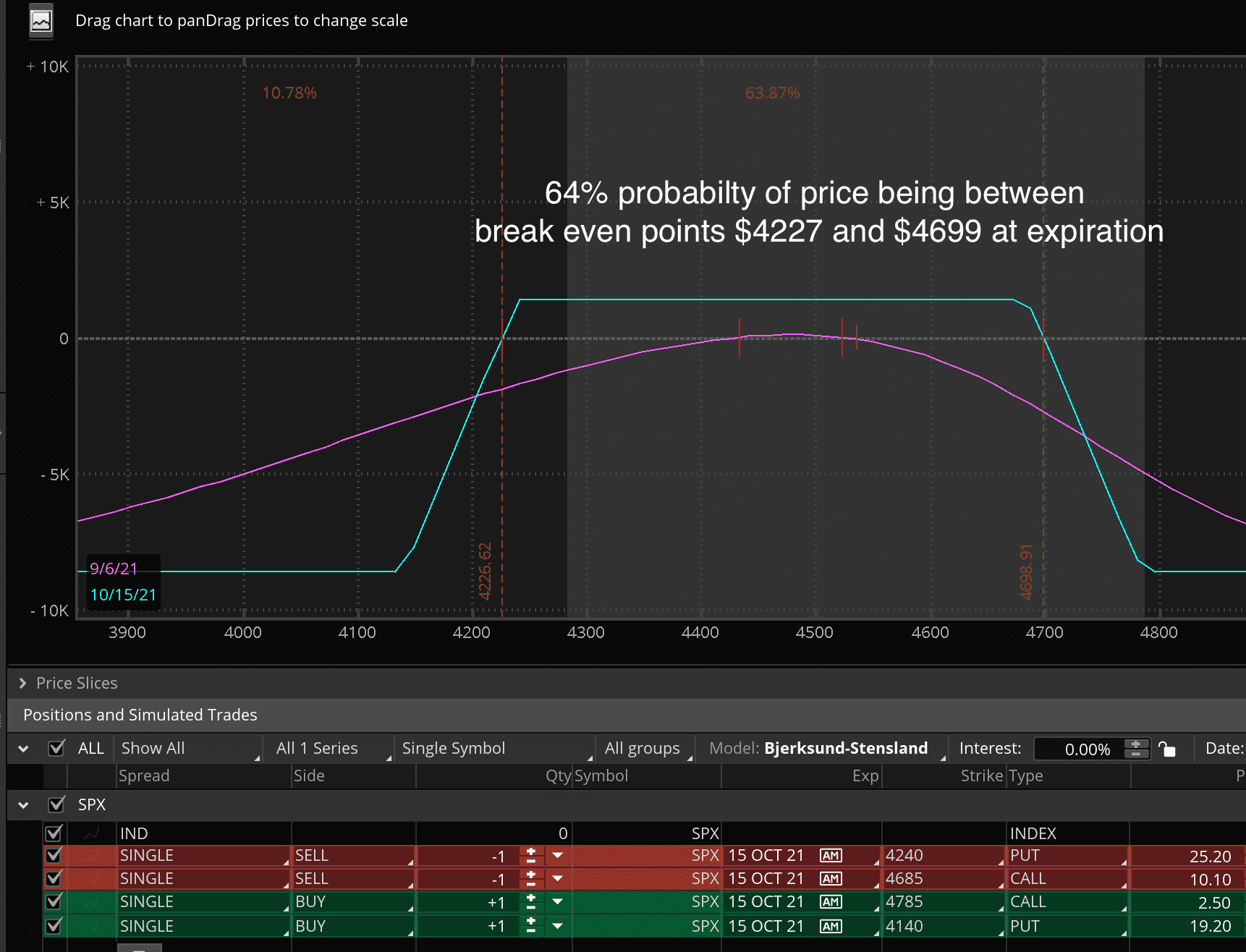 This difference is because it costs $21.70 per share to buy the protective legs. This brings the breakeven point closer to the current price.

(They may be off slightly due to the bid/ask spread)

The initial premium credit received for this iron condor is

The risk to reward on this 100 points wide iron condor is.

One loss on this condor can potentially wipe out six successful trades.

It can be conceptualized in this way for convenience.

But in reality, it is not true that every loss will wipe out six successful trades because not all losses are at max loss, and not all wins are at max win.

In particular, these losses in this area do not wipe out six successful trades.

Iron Condor Success Rate Depends On The Width Of The Spreads

What if instead of the width of the spreads being 100 points wide, we make tighter spreads 30 points wide.

The success rate decreased even further down to 62%. 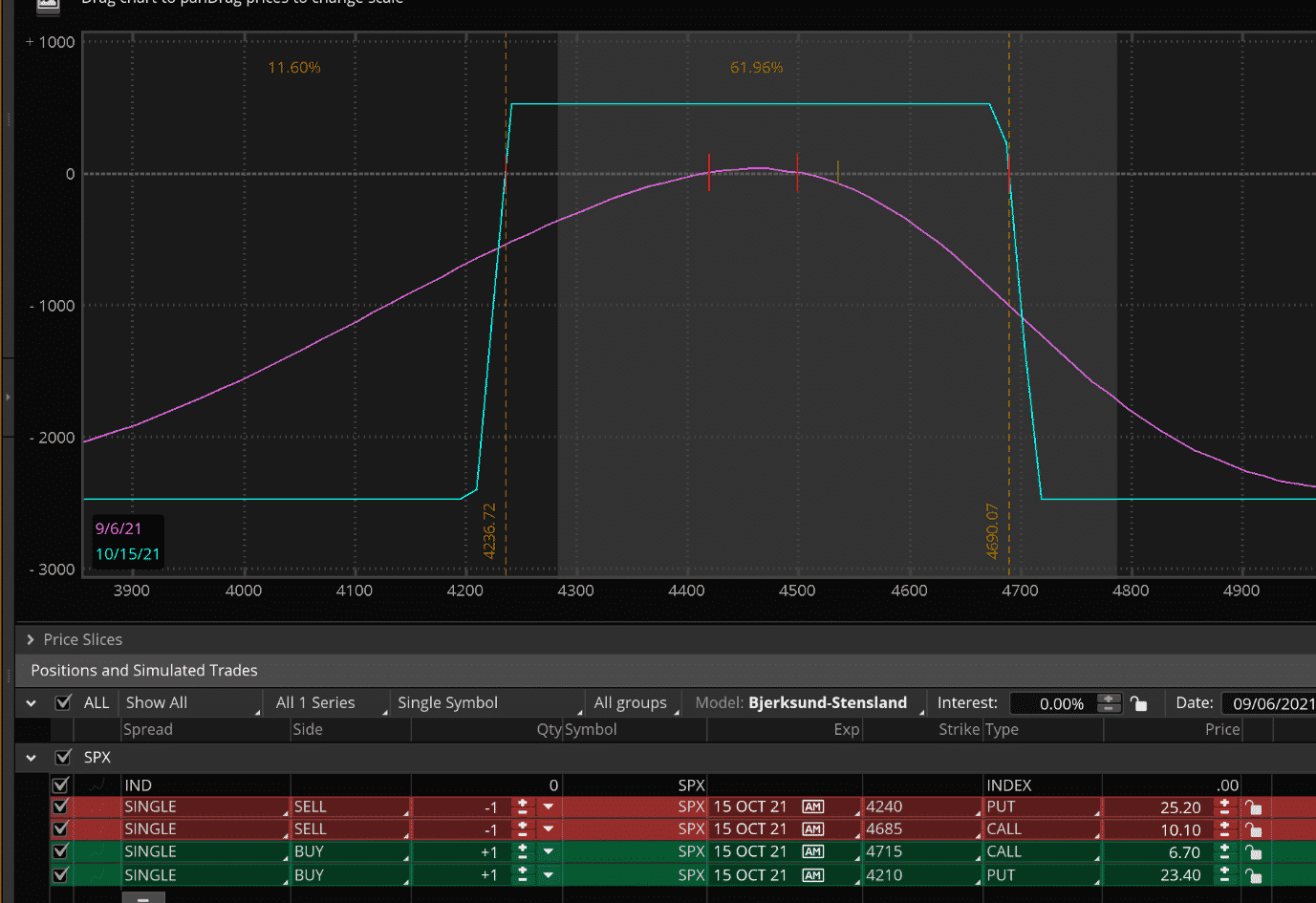 This is because the protective legs cost more to buy ($30.10 for both the call and the put), bringing in the breakeven points even closer.

The premium received is a mere:

The risk to reward on this 30 points wide iron condor is.

This trade is a more conservative condor because one loss will wipe out about five successful trades.

The risk to reward ratio of the 30 points condor is better than the 100 points wide condor.

Whereas the 100 points wide condor has a higher probability of profit.

Changing The Delta Of the Short Strike

Now let’s move the two spreads closer together with the short strikes at 30-delta (instead of 15).

We keep the width of the spread the same at 30 points wide. 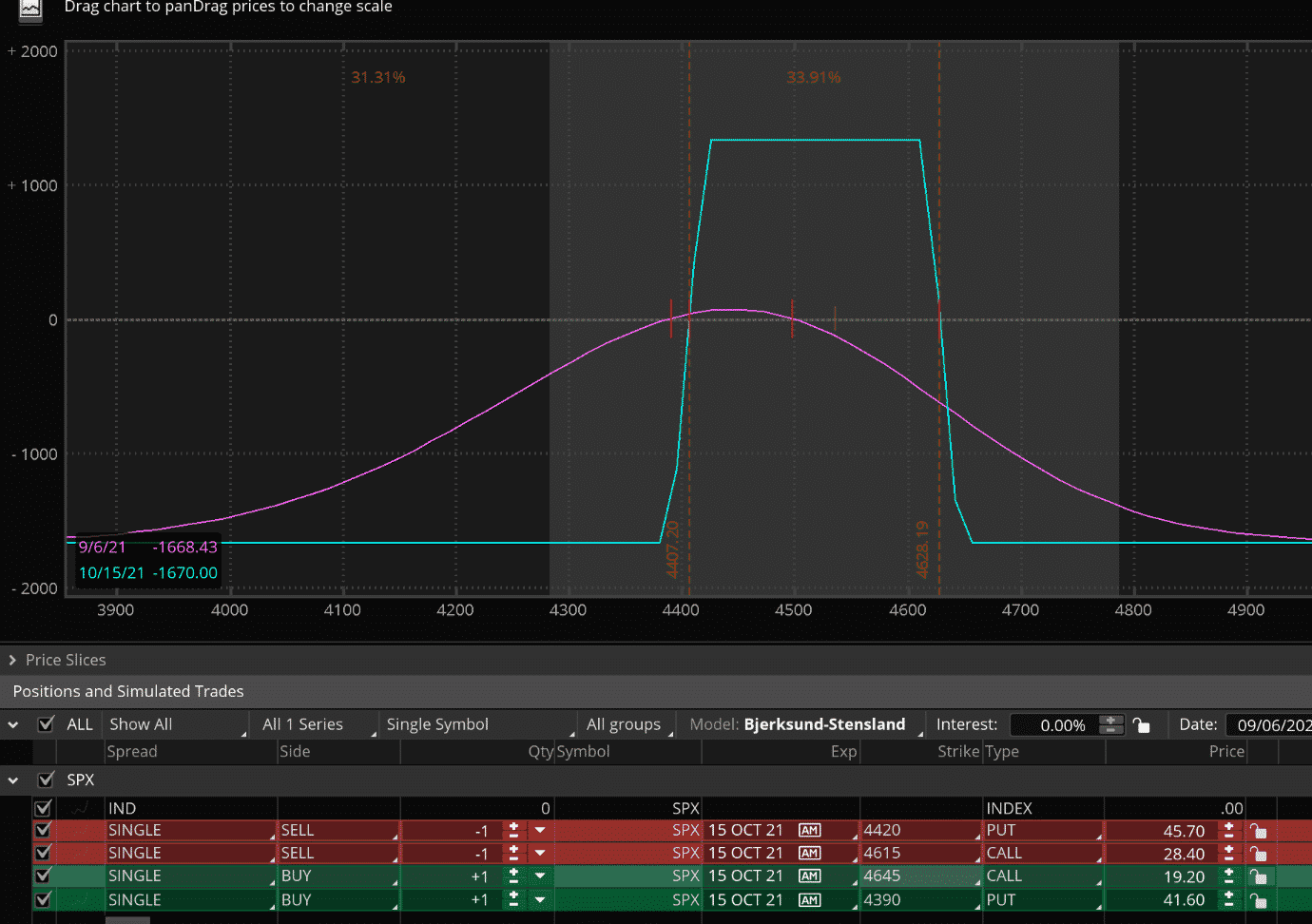 Whoa! That decreases the success rate down to 34%.

The range of prices in which we are profitable has severely shrunken, as seen by the close breakeven points.

The risk to reward on this condor is almost one to one.

Rate Of Success Related To Risk/Reward

The lower the probability of success, the better the risk to reward ratio.

By having a higher probability of success, we naturally will have a higher risk to reward ratio.

Iron condors are high probability trades. But their risk can be five times more than their reward.

But their reward can be five times more than their risk.

The options market is a free marketplace.

So option prices should tend to be fair.

You get what you paid for.

If it was perfectly fair, the buyers and sellers of options would win and lose equally, and neither will make any money in the long run.

This is in theory.

In reality, this is not the case. Option sellers are paid a little bit better.

They are paid for taking on the risk of the implied volatility of the underlying.

So they are getting paid more than the actual realized risk that they are taking on.

Just like car insurance companies get paid premiums to take on the risk if cars get into accidents.

It turns out that cars don’t get into accidents as much as the slightly higher-priced premiums would suggest.

This is how insurance companies make money.

When we initiate an iron condor, we are net sellers of options.

Selling iron condors has a positive expectancy and should return positive P&L in the long run.

Many people have used a computer to run iron condors to determine their rate of success.

One such result from Project Option found that the average P&L per SPY iron condor trade was $35.39 if the trade was held to expiration without the trader touching it.

Assuming that all the short strikes are at the same delta, the strangle has a greater success rate than the iron condor.

Iron condors with wide spreads have a higher success rate than tight spreads.

That is because condors with wide spreads behave more like strangles.

Having the short strikes closer to the money decreases the success rate because it decreases the range where the underlying price can move and still be successful.

We like to sell iron condors with short strikes between 10 to 15 delta and buy around the 5 to 10 delta, as in the following plot 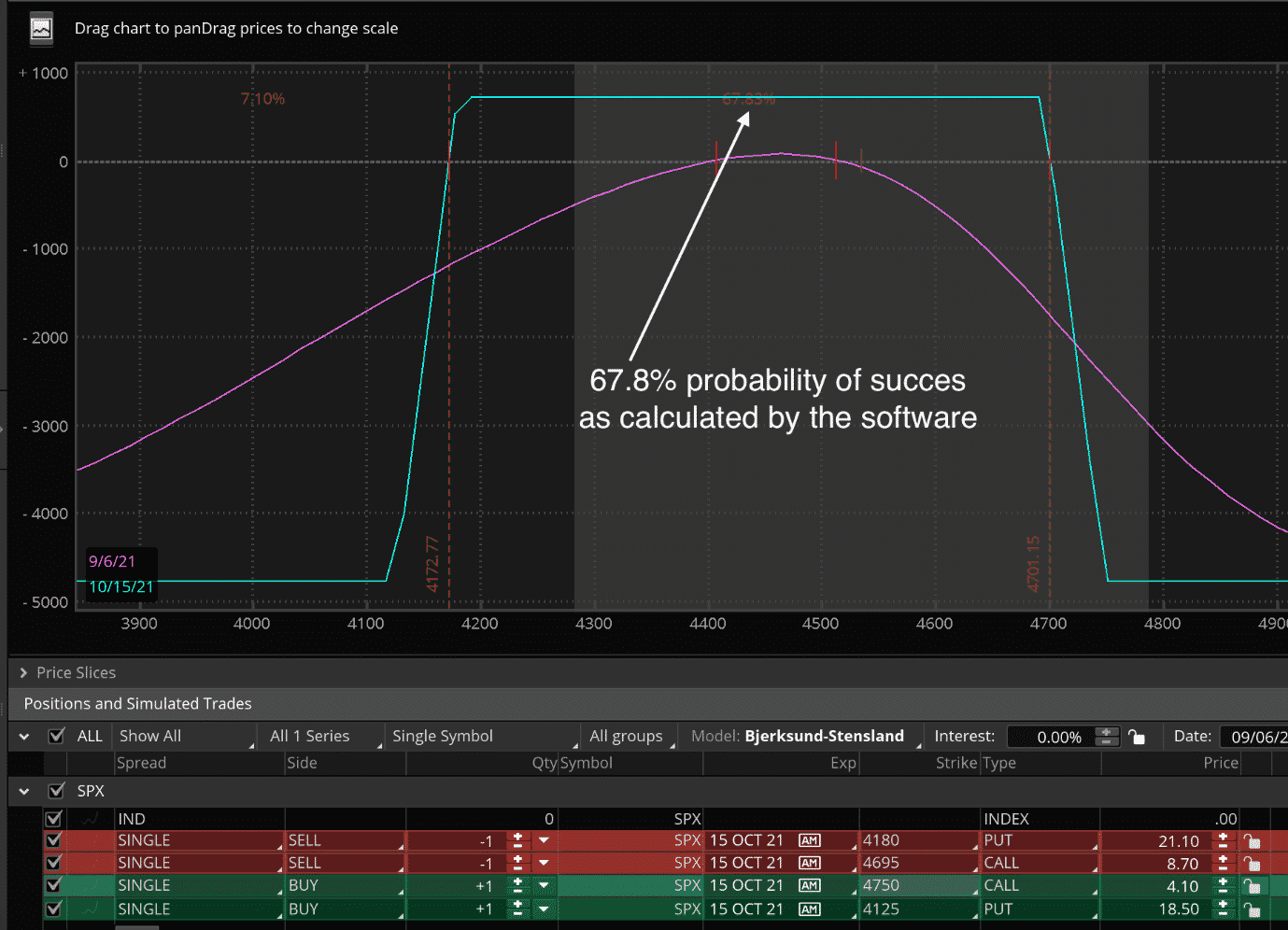 These iron condors have roughly a 70% theoretical probability of success if held to expiration without adjustments.

In part 2, we will see if we can improve this success rate by judicious adjustments and take profit rules.

In part 1, we looked at the theoretical success rate of iron condors if held to expiration without any adjustment.

Of course, we know that in real trading, we do make adjustments, and we don’t always hold to expiration.

These two things change the success rate of iron condors.

We reduce the number of losers by not trading across earnings and when the VIX futures curve is in backwardation.

And if we do lose, we have a stop loss at two times the premium received so that one bad loss does not wipe out too many of our successful trades.

At worst, one bad trade can wipe out the gains of four good trades.

When proper adjustments are made at the right time based on the adjustments guidelines listed here, it can turn losing trades into winners.

If profit target or stop loss is not reached, we close the trade seven days to expiration to avoid assignment.

These rules work best for iron condors with the short strikes at 10 to 15 delta and expiration timeframe around 25 to 60 DTE (days to expiration).

These are not hard and fast rules.

There is room for trader discretion.

For example, if a trade is still struggling after 2 or 3 adjustments, no one will fault the trader if they exit the trade at breakeven.

Similarly, if it is less than three weeks to expiration and an adjustment is needed, or price action is not cooperating, the trader can exit at their discretion.

Based on our experience and backtesting, applying these rules increases the success rate of iron condors beyond what the theoretical calculation predicts.

The following is a backtest of 50 different ticker symbols — many of which are from the best stocks for iron condors.

All of them have prices over $100, which is preferred underlying for iron condor trades.

We computed randomly generated dates ranging from the start of 2018 to mid-2021.

We selected a  different date if the VIX curve was in backwardation or close to earnings.

Here you see the P&L of each trade.

Each trade was sized by the number of contracts so that we collected about $1000  as the initial credit.

The days-to-expiration was between 25 to 60 days.

No trade had a risk to reward ratio of greater than 10.

We try to set up the iron condors with short strikes at the 10 to 15 delta and the long legs at around 5 to 10 delta.

These condors have a theoretic success rate of roughly 70% if held to expiration without adjustments.

This manual backtest had a success rate of 86%.

Trader discretion was involved in which adjustments to make and when to exit based on the end-of-day price dot shown on the payoff diagram of OptionNet Explorer as each of the trades is stepped through day by day. 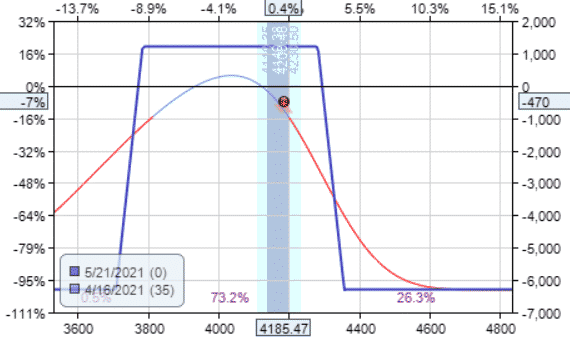 The price chart was not viewed in order to avoid seeing the price ahead.

Instead, trades were navigated by watching the Greeks.

To determine the profitability of a strategy, we can not just look at the win rate.

The backtest had an average win being $460.

Roughly speaking, each trade collected $1000 of premium on $5000 of risk, with an average risk to reward ratio of around 5.

Let’s give each trade two months to run, even though many of them complete much earlier. We need to be sitting on extra cash for use in adjustments.

We also need to be sitting on our hands when the market is in backwardation, or the underlying has earnings.

That would be around 3% per month, or 36% annualized — assuming that we would be able to trade in real markets as we would in a backtest.

So now you have some idea of the success rate that is possible with iron condors.

We’ll leave more details in the addendum for those who want to examine it.

We exited the following trades when they  reached 50% of max profit at around mid-duration without any adjustments:

AVGO did not make it to the 50% target but exited at seven days to live (DTL) without needing any adjustment.

The SPX and RUT indices did not make the 50% target but came out positive with 7 DTL.

Although these, we don’t have any problem holding to expiration because they don’t have assignment risk. 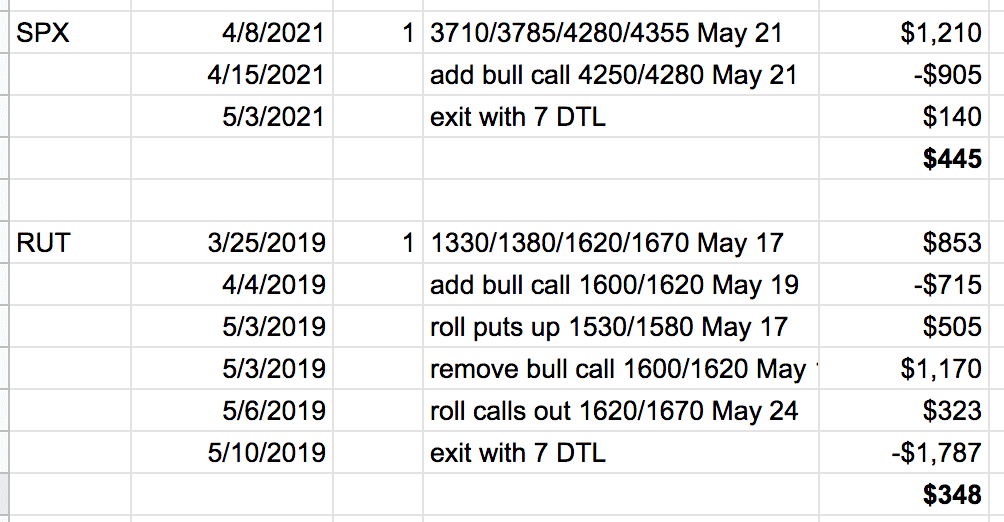 Rolling the untested side is the standard adjustment — adjustment #1 in our guide.

Here are a few examples. 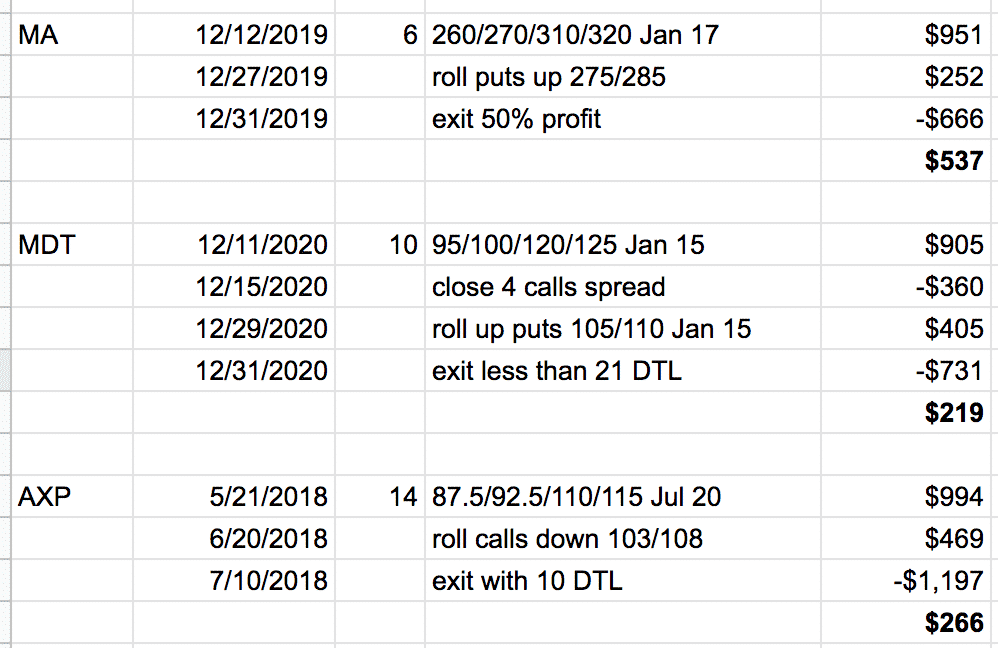 Sometimes we also roll spreads out in time if we can do it for a credit. 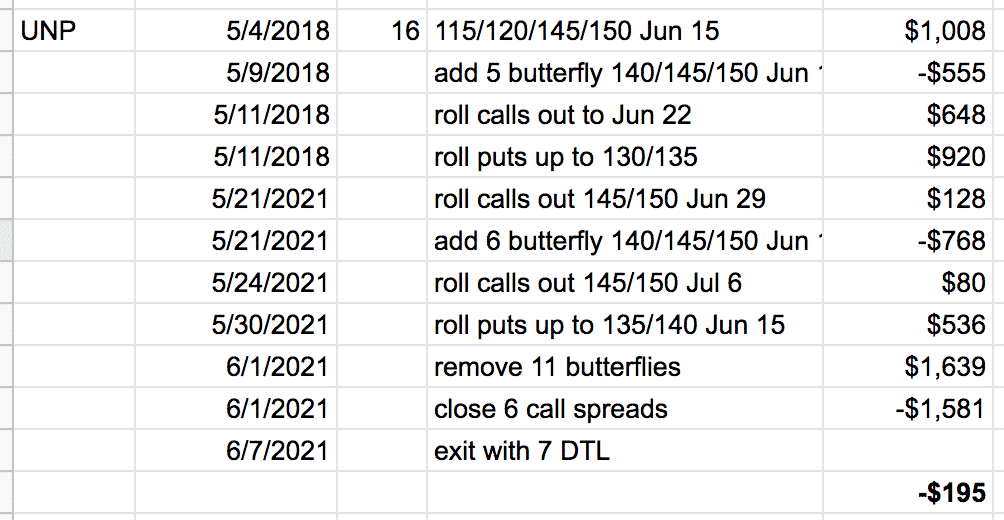 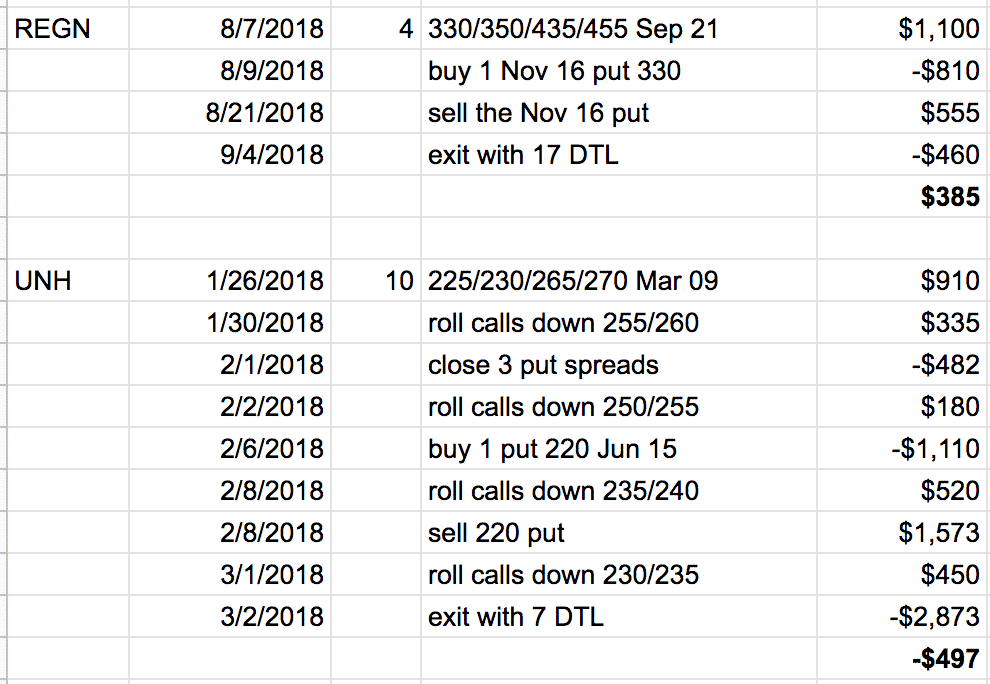 The hedge in REGN lost money.

The hedge on UNH made money. But one can never know beforehand.

The main thing is not to let your hedge lose too much money.

Remove them if they are.

Nevertheless, UNH ended up with a negative P&L independent of the successful hedge.

We see a pattern that losing trades requires a lot of adjustments from the very start.

With the largest loss by BKNG…

So when the following trades are experiencing too many adjustments, the trader exited as soon as a positive P&L was seen, which can turn some potentially bad trades into winners.

That covers all 50 trades.

That’s it for now.