We’re coming off a shortened week with markets taking Friday, April 15 off in observance of Good Friday. There’s a lot to talk about this week with Elon Musk trying to buy Twitter (TWTR) and a record CPI print.

Before we get to that, let’s assess the price action in markets this past week.

US stocks ended the week lower with mostly bearish price action with a few whipsaws mixed in. Here’s a 15-minute chart covering the week’s price action: 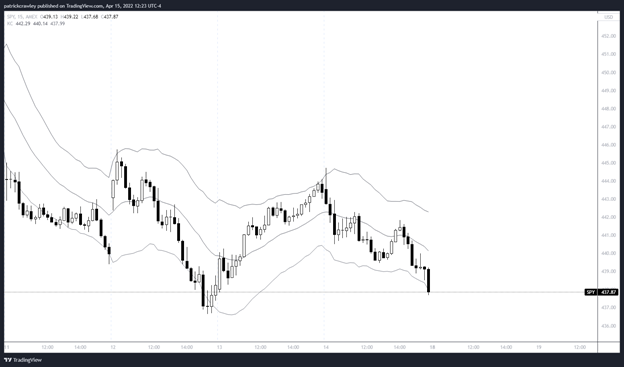 On the daily chart, it’s quickly become clear that we didn’t really go anywhere this week, besides kicking off the week Monday with a gap down. The bull flag pattern forming on the daily chart is still valid, although it still hasn’t “activated” yet by breaking out of the descending horizontal range: 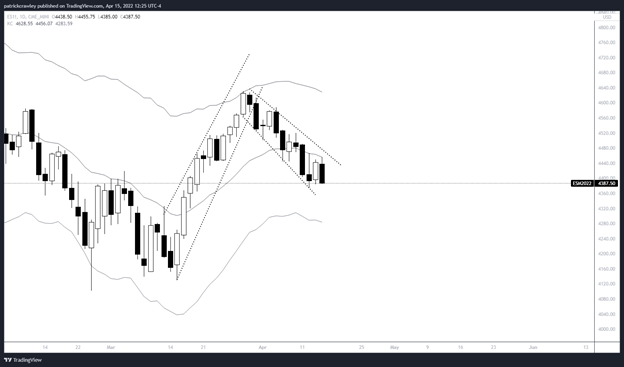 While this retracement is a little sloppier than most swing traders would prefer, we have to remember that this is an index pattern we’re talking about, and stock indexes tend to have far sloppier price action than the clean and symmetrical patterns you might trade regularly in individual stocks.

Crude oil is back above $100, ending the week on a good note at $106. It’s still too early to judge as it’s yet to come back up and retest that $118 level at the most recent swing high: 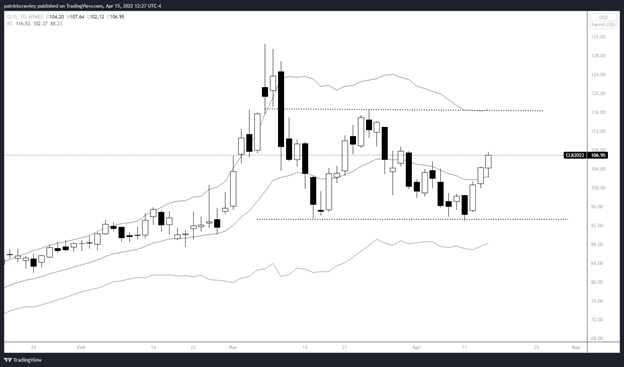 Chart of the Week

This week we’re looking at the dramatic rise in food prices post-COVID, registering a 16.2% YoY increase according to this week’s Producer Price Index report: 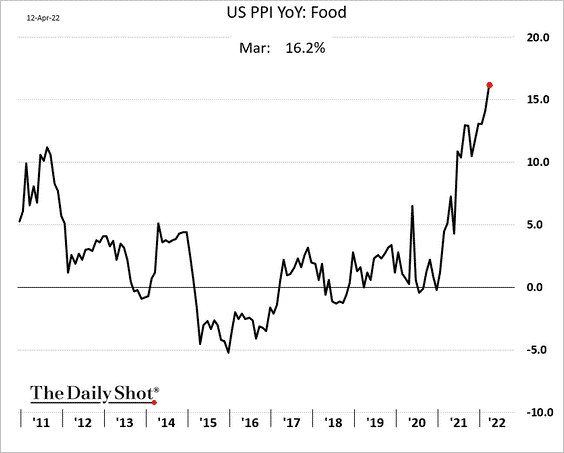 Another eventful week. Here’s some of the summary headlines that moved markets this past week:

However, it’s possible that none of this matters. Twitter (TWTR) stock closed down 1.7% on the day of Musk’s offer, at $45.08 per share, indicating that the market simply doesn’t trust Musk’s sincerity or ability to actually close the deal. It’s really worth noting that this deal is subject to financing, which is a famous red flag for M&A traders. After all, his reputation in this manner is definitely tainted by the $420 going-private debacle with Tesla (TSLA), for which he had to settle fraud charges with the SEC.

The Saudi Arabian Prince Alwaleed bin Talal, a large Twitter shareholder, made rounds on Twitter this week for his criticism of Musk’s offer, which he saw as lacking. He said the offer doesn’t “come close to the intrinsic value” of Twitter.

The Consumer Price Index, the benchmark of US inflation, hit a record high of 8.5% YoY this week in the first inflation number to print post-Russia/Ukraine invasion. Without a doubt, inflation is the primary conversation in macro circles right now along with the Federal Reserve’s perceived inability to fight it.

Furthermore, the Producer Price Index report was even worse, coming in far above expectations at 9.2% YoY and registering the highest price increases in several years.

Most strategists are commenting that this CPI print makes it nearly certain that the Fed will hike by 50 basis points at the next meeting, with more aggressive rate hikes than expected to follow.

Tether, which is the most popular stablecoin in the crypto ecosystem, has always earned a healthy skepticism from the crypto community with regard to its reserves, which are held mostly in commercial paper of which it doesn’t disclose which companies it lends to.

News hit the tape this week which perked up the likes of “Bitfinex’ed” a popular social media Tether skeptic who was cited in lawsuits against Tether. Tether is beginning to reduce its commercial paper holdings, serving as a red flag to many.

We saw big earnings reports out of the major money center and investment banks last week, reporting mostly positive earnings surprises despite Wells Fargo missing on revenue. Traders are watching the financials closely as the rapid rise in interest rates and future forecasted rate hikes from the Federal Reserve has significant implications for the sector after over a decade of near-zero interest rate policies.

This coming week kicks off the start of Q1 2022 earnings season, with dozens of large-caps reporting.

This last week we learned about how the Ukraine invasion affected inflation numbers from the March CPI and PPI reports, and the answer is, pretty significantly.

Coming up this week, we get some well-needed data on housing. Of them, the existing home sales number should be most interesting as we saw the February numbers fall short of expectations and fail to follow the seasonal trend as it typically does.

The post Market Overview for Week of April 18, 2022 appeared first on Warrior Trading.

How to Successfully Trade Different Types of Stocks

What Are Pivot Points in Trading?