Thirteen years ago this month, the Frankfurt-listed shares of Volkswagen more than quadrupled in two days, briefly making the German automaker the most valuable company in the world.

After the stock’s peak on Oct. 28, 2008, it plunged 58% in four days and by September that year, the shares were down 70% from their top, giving away most of the squeeze. 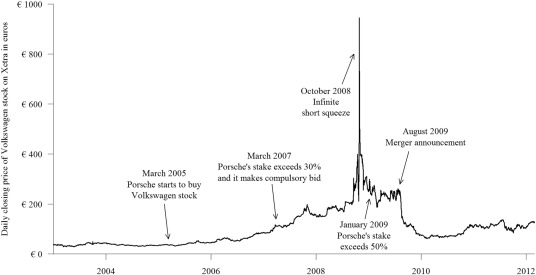 Although it has been over a decade since the Volkswagen short squeeze, there are still many lessons that day traders can learn from this particular stock market event.

Let’s have a look at the definitions of “short selling” and “short squeeze,” and then dive into the VW short squeeze of 2008.

What is short selling?

Short selling is a type of strategy that traders use to speculate on a future drop in the price of a particular stock.

This strategy first involves borrowing a certain amount of shares of the stock you wish to sell at a market-determined interest rate and then selling those borrowed shares to profit from a future market drop.

Traders that engage in this type of market speculation are known as short-sellers or shorts.

Short-sellers profit by offloading the borrowed shares at an elevated price and subsequently repurchasing them at a lower price if the price of the stock goes down.

The profit is simply the difference between the price at which the short-seller sold the shares and the price he purchased them back at less any transaction and borrowing costs.

The best way to understand this trading strategy is by looking at the following example.

Let’s say you do some research and believe that Delta Airlines (NYSE: DAL)’s traffic is on the decline and oil prices are heating up and you think the stock will continue its downward trajectory for at least the short-term. freturn

So, you make an order to short sell 100 shares of DAL and you get filled $20. Your stockbroker is going to borrow the shares, and offload them on your behalf. Your cash balance will increase by $2,000 and the value of your shares will drop by $2,000. You now owe your broker 100 DAL shares.

If your prediction is right – and the price of DAL begins to fall – you can then buy 100 DAL shares at a significantly lower price to replace the ones you borrowed. This is known as “short covering” and you will keep the difference as a good profit on the short sale.

But if should you be wrong and the price of DAL stock moves up, you will be in hot soup and forced to buy the shares at an elevated price like $15 and end up with a $500 loss.

A short squeeze, on the other hand, is when the price of a stock begins to rise rapidly, forcing short-sellers who had bet against the stock to hastily buy the stock back to avoid incurring further losses.

By buying back their short positions, the short-sellers trigger a loop. The rising demand for the stock attracts more buyers, which sends the stock higher. Consequently, this forces even more shorts to cover their positions or buy back.

You don’t have to go back very far to learn about one of the most remarkable short squeezes of all time.

In January 2021, shares of GameStop (NYSE: GME), which had been trading around $2.57 per share, suddenly skyrocketed, eventually reaching $500 – when retail traders on Reddit forum Wall Street Bets started buying the stock.

This was bad news for traders who had bet that GME stock would keep falling. When the stock started shooting up, these short-sellers were caught in a short squeeze. And because they had borrowed funds to help them short GME, they now had return the funds by buying the stock at elevated prices.

Or else, stand firm – and risk incurring even more heavy losses.

Now let’s move on to the VW short squeeze

Why the Volkswagen short squeeze happened and how it unfolded

During the global financial crisis of 2008, something strange happened. Volkswagen went through a short squeeze and briefly became the biggest company in the world.

Back then, as most of the world was reeling from the great recession, Volkswagen became a target of short-sellers because of its high debt load as well as exposure to the credit and business cycles.

Therefore, only a small number of shares were available to trade in the Frankfurt stock markets (free float).

Rumors about Porsche planning to raise its stake in VW started swirling, and an army of traders piled into the stock.

Porsche confirmed those rumors saying that on top of the 44% stake it held in Volkswagen, it had acquired another 31% stake using cash-settled call options.

This meant there were only less than 6% of VW shares available to trade in the market since another 20% of the stock was held by the German state of Lower Saxony.

Their scramble for few remaining VW shares caused the stock to jump from €210 to more than €1,000 in just two days. The massive squeeze forced short-sellers who had placed bets that VW would fall to but the stock at higher and higher prices in a bid to cover their short positions.

Consequently, Volkswagen became the world’s most valuable company as its market capitalization rose to $370 billion in two days.

The Volkswagen short squeeze did not last long.

After to rising more than €1,000, the stock began plummeting following Porsche’s announcement that it would sell up to 5% of its stake (at a decent profit) to make life easier for desperate hedge funds and short-sellers.

Porsche said the move was meant “to avoid further market distortions and the resulting consequences for those involved. However, the company laid the blame for the massive surge in Volkswagen stock squarely with the hedge funds and short-sellers themselves.

Several weeks later, the stock was down 70% from its peak. But much of the damage had been done as short-sellers had already incurred heavy losses after closing out their positions at extremely high price levels.

If a hedge fund or a trader believes that shares of a company are overpriced, they can choose to short the stock. As mentioned earlier, a trader who is short selling a stock doesn’t own the shares but is promising to return them later to his broker.

So he borrows the shares at a certain price and sells them. When the price falls, he buys them back at the lower price and delivers them back.

In the case of Volkswagen, the stock did not drop, but hedge funds and other short-sellers had to buy shares at a loss to honor their contract. It is estimated the VW short squeeze cost short sellers about £30 billion ($38.33 billion).

Is Uplisting a good thing for Stocks? NASDAQ and TSX Examples

What is a CDR? CDR vs Fractional Shares – Canadian Depository Receipt

How To Day Trade Qantas. Qantas Share Price Has Moved A Lot Lately. Here’s How To Trade It