Rivian, the much-hyped EV maker touted as a “Tesla Killer ” by some, went public today (Wednesday, November 10) opening at $106, well above its pricing of $78, making the IPO a massive success so far.

The company primarily makes electric light trucks; a pickup truck (R1T) starting at $67,500 and an SUV (R1S) starting at $70,000, with plans to expand their product portfolio once they’re up and running.

Their trucks are getting rave reviews from automotive reviewers, with MotorTrend calling the R1T “the most remarkable pickup truck we’ve ever driven” after driving the truck over 7,000 miles and across nearly the entirety of the United States.

But Rivian is not without its critics.

The company has zero revenue and is going to lose more than a billion dollars in Q3 2021 alone.

And yet they’re awarded with a market capitalization of around $90 billion, which is more than that of Ford (F), General Motors (GM), and Honda Motors (HMC), companies that deliver millions of cars per year with several decades each in auto manufacturing and sales experience.

What Does Rivian Do?

Pickup trucks are some of the highest margin vehicles sold by automakers and the category is growing rapidly in the United States, with the top three best selling vehicles in 2021 being pickup trucks: the Ford F-Series, Chevy Silverado, and Dodge Ram. 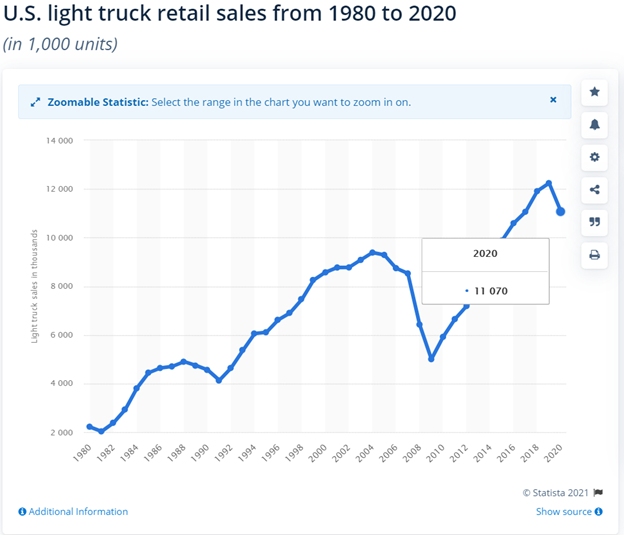 Their flagship truck, the R1T pickup truck, is equipped with 835 total horsepower, with each wheel being driven by an individual 210hp electric motor.

The trucks come bundled with a litany of technology-driven safety and driver assist features, much like their competitor Tesla. However, at a first glance, it looks like Tesla has much stronger tech in their Full Self Driving package.

Rivian doesn’t have a full autopilot system and instead ops for advanced highway lane assist and adaptive cruise control which leverage the multitude of cameras, sensors, and radars the car comes equipped with.

Much is being made of the company’s partnership with Amazon, aiming to build 100,000 delivery vehicles for them by 2030 and 10,000 by 2022. In a massive show of confidence, Amazon is the company’s largest investor, owning upwards of 148 million shares acquired in the private market, and they’re aiming to buy another roughly 10 million in the IPO.

Furthermore, Ford is a backer of the company, and the two originally had plans for Rivian to build an electric SUV for Ford’s luxury brand Lincoln, and although those were scrapped, the two automakers are still in discussions about partnerships.

Other large names have made large investments as well, including the Soros Fund, Dan Loeb’s Third Point, Ford, and T Rowe Price.

Given the price action in the bellwether of the EV industry, Tesla (TSLA) and its market cap reaching $1 trillion, putting it in a camp with only four other companies: Microsoft, Alphabet, Apple, and Amazon, the hype around the electric vehicle industry is higher than ever.

Then you have the green-friendly policies of the Biden administration with their target for half of US automobile sales to be EVs by 2030 and to replace the US government’s vehicle fleet with electric vehicles.

And this next statement might sound crazy (because it is), but Rivian’s lack of revenue probably works to its advantage in this market. There are no realistic delivery numbers to ground pie-in-the-sky projections from analysts, nor are the pains of being a new automaker evident for Rivian investors yet.

Then you have the Amazon partnership. Most investors view Amazon differently than their big tech counterparts.

Amazon is viewed as playing chess while the rest are playing checkers. This is owed to Bezos’ clear, very long-term vision for the company, and his difficult choice to forego profitability in favor of business strategy while his company was trading publicly.

In other words, from a sentiment point of view, an Amazon partnership is much more bullish than one with Microsoft or Google, at least that’s the way I see it.

When a company has no sales, a product that is just beginning to ship in limited quantities, and no experience in a field, you can’t use traditional valuation tools.

Instead, I think you have to approach a company like Rivian more like a call option. It could wildly succeed but there’s a significant likelihood that they’ll fail given they’re entering one of the toughest industries in the world.

This is a concept similar to that of Expectations Investing, where you view a stock price as almost like a set of odds, like you’re making a bet in the casino. Here’s a brief explanation:

an investor [should] start with a known quantity, the stock price, and ask what it implies for future financial results. After showing how to read expectations, Mauboussin and Rappaport provide a guide to rigorous strategic and financial analysis to help investors assess the likelihood of revisions to these expectations. 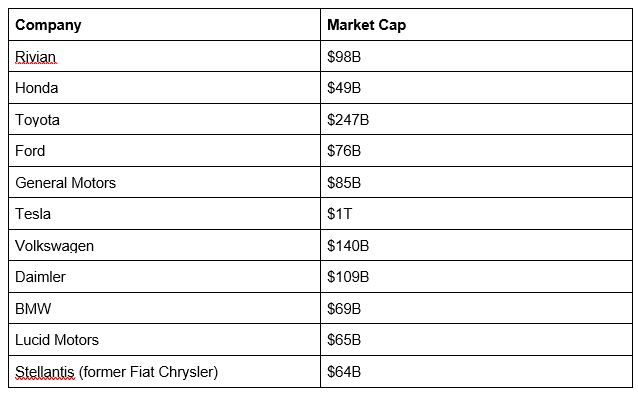 As it stands with the current price at the time of writing, you can buy the Honda Motor Company twice for the market cap of Rivian.

Rivian has delivered almost zero cars, while Honda delivered 1.2 million vehicles in 2020 alone, with a very strong consumer reputation for reliability. The Civic and Accord are often cars that mechanics say “last forever,” while we know next to nothing about the quality of Rivian’s vehicles, how consumers like them, or if they can even sell them.

Every once in a while, an IPO like Rivian occurs and confirms that we’re still in a market of meme stocks.

Everything with a great growth story is bid regardless of the logistics of actually achieving said growth. It’s almost like you want to do exactly the opposite of what those Benjamin Graham books taught you in this market.

However, that’s not to trash on Rivian, it’s just very richly valued for a company that has proved almost nothing. The trucks look amazing and more competition in any market is good for the consumer.

Regardless of what happens in the end for Rivian, the stock is likely to be on daily “Hot Lists” everyday for a while.

What Is Tax Loss Harvesting?

Analyze Trends with the EMA Ribbon (and Spot Entry Points)

SMA vs EMA – Which Is Better For Day Traders?