It’s Thanksgiving this week, which means we can expect a pretty tame and boring week of trading, as most of Wall Street is more worried about their travel plans than taking risks that might put their job in jeopardy.

Markets are closed on Thursday for Thanksgiving, and close early at 1:00 pm EST on Friday, so only three days of full trading. 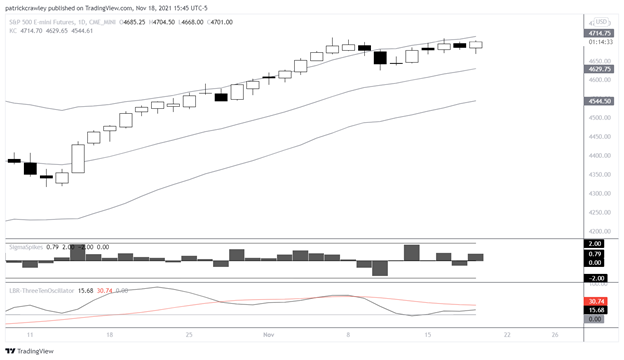 The S&P 500 is still in a very strong uptrend, following last week’s pullback. Even though the S&P swiftly declined over 2% from it’s high of 4711.75, viewed in context, that’s actually a pretty tame pullback.

This upswing was so strong in momentum, with several overnight gaps, that you’d expect a stronger pullback.

A significant breach below 4625.25 indicates that the market has tested the highs, failed to rally, and then failed at short-term support, all of which is quite bearish for the short-term trend.

As of now, though, the signs are pointing to the stock breaking through to new highs, as the market is testing the highs and there’s no price rejection in sight. If we move down to a 4-hour chart, observe how the range has contracted considerably right near the highs, indicating a level of price acceptance, or in other words, there’s little disagreement on the price right, which frequently leads to that 4711.75 resistance level breaking. 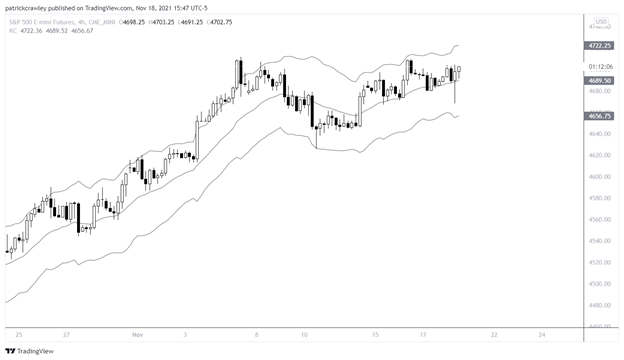 The Themes Driving This Market: This Week We Talk Inflation

On a macro level, inflation is one of the key themes driving this market.

Between politicians and pundits stoking the flames and blaming each other, massive shortages across nearly the entire supply chain, increased prices, and large companies complaining about their issues dealing with inflation, investors and traders are waiting to see how things will play out.

It’s difficult for the Fed or White House to ignore inflation either, between the consumer price index hitting a 30-year high of 6.2% in October, home prices soaring across the United States, and significant price increases across a swath of everyday consumer products.

And now that the inflation conversation is thoroughly mainstream to the point that you overhear conversations about inflation at the grocery store, there’s plenty of punditry as far as who’s fault this is, which products are too expensive to buy, etc, there’s very little information on trying to actually trade the market that we’re given.

According to a study called The Best Strategies for Inflationary Times performed by the massive hedge fund Man Group, the best performing assets during inflationary times are energy commodities like crude oil, and the price action in crude is confirming this:

This is because energy, and gasoline in particular, track inflation closer than almost any other asset class, as you could see below aided by this excellent chart I got from Kevin Muir of the Macro Tourist: 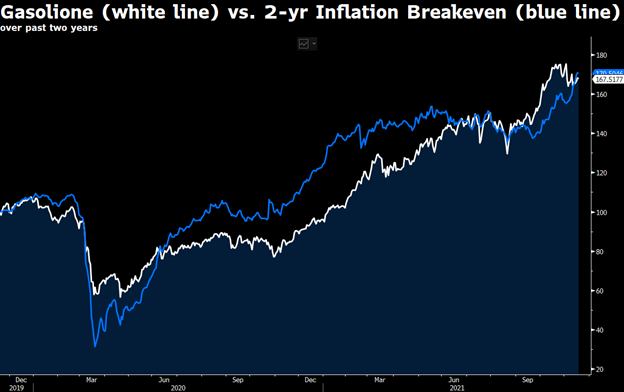 So if you’re not a global macro trader and can’t make heads or tails of central bank conversations, currency crosses, or how to interpret the outcome of an Argentinian election, a good shortcut to understand how the inflation trade is working out is by just looking at some charts of energy commodities like crude oil and gasoline.

Stocks Likely to Be In Play This Week

To be fair, EV stocks have basically been in play all year, it’s a new sector with tons of new entrants like Rivian (RIVN) and Lucid (LCID) throwing their hat in the ring, hoping to be the next Tesla.

But the heat just got turned up on the EV sector. According to a Bloomberg report, Apple (AAPL) is planning to build their own fully autonomous vehicle and launch it in four years.

Bloomberg mentioned that “fully autonomous” means completely free of human intervention. No steering wheel, no pedals. Taiwan Semiconductor (TSM) is said to be tapped to build the chips for this car.

Apple’s entry into the EV market has been a recurring market rumor for a few years now, with rumors of the company aiming to buy Tesla making the rounds around social media semi-regularly.

It’s worth noting that Bloomberg’s source on this report is anonymous, so it’s possible that their source could be misleading them, although it is Bloomberg, who are generally quite solid in their reporting, especially with regard to market-moving topics like these.

Retail Stocks Are In Play

The market thought retail was left for dead. Not only were they given ‘melting ice cube’ status as a result of Amazon’s prowess, but the COVID-19 lockdowns and other complications looked like   a death blow. But retail is back and Americans are spending money in retail stores like crazy.

This chart says it all (courtesy of the Macro Tourist): 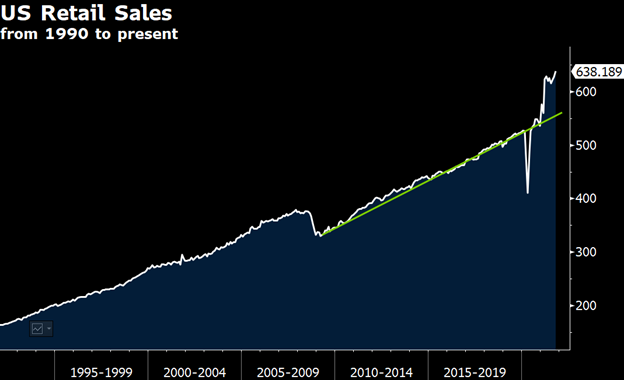 There was a barrage of better-than-expected earnings reports in the retail sector from companies like Kohls (KSS), Macy’s (M), and TJ Maxx (TJX) last week, with several mature retail stocks making 10%+ advances on earnings.

However, price is what pays, and there’s some interesting price action in the SPDR S&P Retail ETF (XRT), which finally broke out of a long-term range as a result of these bullish earnings reports:

It’s been an exciting two years in SPAC land, but not so much for Bill Ackman, whose Pershing Square Totine Holdings (PSTH) SPAC has continually disappointed SPAC traders, between taking forever to find a deal, and the highly-complicated deal he finally struck with Universal Music Group which failed.

PSTH has been looking for deals since the summer of 2020 and has consistently failed to deliver, while most successful SPACs find deals in months. This is despite massive initial investor interest and speculation driven by Ackman’s fame as a successful hedge fund manager.

However, there might be light at the end of the tunnel, as Ackman announced last week an update on the SPAC, telling investors that they’re actively scouting deals, but if things don’t work out, they will be returning capital to investors.

What are the Highest Return Investments?