Have you ever wondered about stock tickers that are words? We found 39.

Okay, no more talks about math or the Greeks this time.

I’ll give your thinking cap a break.

Kick back and enjoy the light read over a glass of wine, and you might learn a few interesting tidbits about some companies you’ve never heard of.

Let’s start with the easy ones because their symbol tells us precisely what the companies do, making them easy to remember.

LOVE (Lovesac) is not a dating service but sells bean bag chairs.

SKY (Skyline Corp) is not in the airline industry but the mobile homes business.

DISH (DISH Network) is not involved with gourmet dish meals or dinnerware, but satellite dishes that bring shows like “Animal Planet” into your homes.

CAT and DOG are animals, but these have nothing to do with pets.

And DOG is not even a company.

It is the ProShares ETF that shorts the Dow index.

Another ticker word that you might be more familiar with is SPY, the S&P 500 ETF.

If your company needs a task to be done, TASK can find someone for you.

Instead of an open house, open-door.

According to their blog, there are three reasons why they name their company is named Snowflake.

Whoever came up with that LAND one must be a genius.

LUNG and LEG are body parts.

LEG (Leggett & Platt) makes high-end adjustable beds so that you can rest your leg.

It was founded when J.P. Leggett developed a new type of bedspring and formed a partnership with his brother-in-law, C.B. Platt.

Not sure why they both go by initials instead of first names.

What Do They Sell?

FIVE (Five Below) sells kids’ accessories, some of which are below five dollars.

Robinhood is legit but has its controversies, which we wrote about previously.

That’s why their corporate headquarters are in Cambridge, Massachusetts. 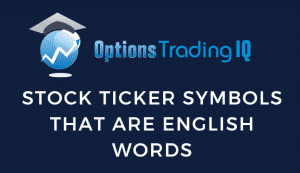 When he died in 1940, it was inherited by his daughter Ruth Buchan.

Apparently, she didn’t want to operate a hardware store, so she sold it to his brother James Lowe that same year.

Lowe expanded at an average rate of about 22 new stores per year by doing some quick math.

I mentioned that I wasn’t going to talk about math in this article.

I’ll try to keep my promise of not talking about Greeks.

Instead, I’ll talk about Swedes.

While SPOT (Spotify) is quite a popular music streaming service in the United States, it was founded by two Swedes, Daniel Ek and Martin Lorentzon, and is headquartered in Stockholm, Sweden.

SPOT is currently is part of the Russell 1000 index.

In 2015, STEP (StepStone Group) leased the 17th floor of the “Lipstick Building” for its Manhattan, New York office.

This was the same office where Bernie Madoff had operated his Ponzi scheme previously.

The office building is known as the Lipstick Building because it looked like a stick of lipstick.

MA (Mastercard) has one of the world’s most recognizable logos.

However, slight modifications were made over the years.

The basic logo consisting of overlapping red and orange circles was conceived by Robert Leavelle, Senior Vice President of Farmer’s and Merchants Bank of Long Beach, and his son.

BILL and KIM are not really words, but names of people.

There you have 39 words and two names that you can punch into your charting software and pull up a candlestick chart.

Maybe one will pop up with the setup you are looking for.

How to Use the Phoenix Finder