Tesla (TSLA) continues to be one of the strongest stocks in the market right now and is holding above rising 21, 50 and 200-day moving averages.

TSLA stock is putting in a nice series of higher highs and higher lows.

Traders that expect strength in TSLA stock to continue could look at a bull put spread option trade.

Selling the November 19, 700 put and buying the 695 put would create a bull put spread.

This spread was trading for around $0.75 yesterday. That means a trader selling this spread would receive $75 in option premium and would have a maximum risk of $425.

That represents a 17% return on risk between now and November 19 if TSLA remains above 700. 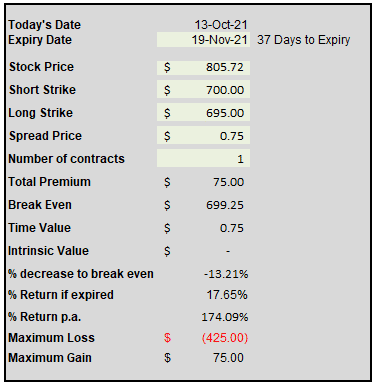 If Tesla stock closes below 695 on the expiration date, the trade loses the full $425.

The breakeven point for the bull put spread is 699.25, which is calculated as 700 less the 0.75 option premium per contract.

This bull put spread trade has a delta of 1 which means it is a similar exposure to owning 1 share of TSLA stock, although this exposure will change over time as the stock price moves.

In terms of a stop loss, if the spread increased in price from $0.75 to $1.80, I would consider closing early for a loss.

Tesla is due to report earnings on October 20th, with the options market pricing in a potential 7% move in either direction.